Maathai to Speak in Portland 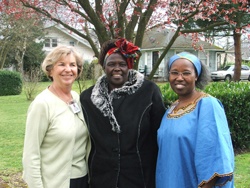 Portland will be graced by one of the world's foremost women this week, when Nobel Peace Prize laureate Wangari Maathai, a member of the Kenyan Parliament, visits the city.


In her work, Maathai encourages a link between environmental sustainability, democracy and peace.


Elected to Parliament in 2002 with an unprecedented 98 percent of the vote, Maathai is considered one of the most influential women of her generation. She serves as assistant minister for Environment, Natural Resources and Wildlife in Kenya's ninth Parliament.


Maathai was appointed chair of the Department of Veterinary Anatomy in 1976 and an associate professor in 1977, becoming the first woman to attain those positions in the region.


While serving on the National Council of Women of Kenya in 1976, Maathai introduced the idea of planting trees in deforested areas of Kenya. The main focus of the grassroots effort is for groups of women to plant trees on their farms and on school and church compounds to conserve the environment and improve their quality of life.


In 1986, her Green Belt Movement established the Pan-African Green Belt Network and introduced the tree-planting project to other African countries.


As a speaker before the United Nations, Maathai is recognized internationally for her persistent struggle for democracy, human rights and environmental conservation. She served on the U.N.'s Commission for Global Governance and the Commission on the Future.


She and the Green Belt Movement have received numerous awards, most notably the 2004 Nobel Peace Prize.
Maathai was also listed in the Global 500 Hall of Fame and named one of the 100 heroines of the world. In 1997, she was elected by Earth Times as one of 100 persons in the world who have made a difference in the environmental arena.