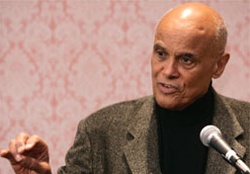 The four-day gathering was aimed at developing a long-term economic empowerment plan for Blacks.

Farrakhan, the head of the Nation of Islam group, said the U.S. educational system has failed to teach Blacks basic skills and how to succeed after graduation and requires massive restructuring.

"Black people all over America and all over the world, there is something wrong with the way we have been trained in a white supremacist, racist environment," Farrakhan told about 700 people gathered in the gymnasium of Gary West Side High School on Friday, the Post-Tribune newspaper reported.

"You have not been trained to succeed," he said. "We must never sell that lie to the next generation of Black children, that the system works for all. It does not."

Belafonte was heavily critical of the White House's handling of Hurricane Katrina and its aftermath.

"How can we have Katrina and tens of thousands of people staring into the abyss of this tragedy ... and not have the nation of Black folk in righteous indignation walking on this nation, saying 'pay attention,' "he said.

He also repeated criticisms of Secretary of State Condoleezza Rice and other Black members of the Bush administration, who he said had not publicly questioned White House decisions in the war in Iraq or policies that have hurt the poor.