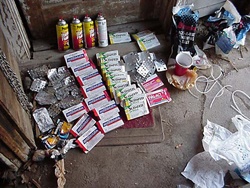 CHATTANOOGA, Tenn.--A Tennessee lawmaker is trying to persuade the state to build a drug treatment clinic specifically for people addicted to methamphetamine.

State Rep. Judd Matheny, a Republican from Tullahoma, said the projected $10.1 million cost would save taxpayers in the long run by keeping some offenders out of prison.

But the chairman of the Tennessee Legislature's Black Caucus said it's unfair to create an exclusive treatment center for meth -- which is primarily abused by Whites -- and not for other illegal drugs, such as crack cocaine, which is used mostly by Blacks.

"While I've been a big supporter of methamphetamine legislation, we do need to focus more on issues of crack and whatever," said state Rep. Johnny Shaw, a Democrat from Bolivar. "It doesn't matter what kind of addiction it is -- it destroys families."

Matheny, who represents a predominantly White, rural district where meth is the most abused addictive drug, said he believes meth poses the most imminent threat to the state.

"There are families at stake with every one of these offenders," he said. Shaw said the proposed treatment center needs to include abusers of other addictive drugs, and Matheny indicated he would not oppose revising his bill to include other first-time drug offenders.

Matheny's bill and a companion measure sponsored by Sen. Jim Tracy, R-Shelbyville are pending in House and Senate committees.

Meth is cooked from toxic household and workplace products and some cold tablets, commonly in potentially explosive, clandestine labs that produce toxic vapors. Meth addiction is also attracting attention in Washington, including a budget proposal by President Bush that would spend $25 million for meth treatment in 2007.

Two Tennessee congressmen, Republican Zach Wamp of Chattanooga and Democrat Jim Cooper of Nashville, co-authored a provision in the Patriot Act extension that provides a $20 million grant program for states to get aid for "meth-endangered children."

A group of state attorneys general who are fighting Bush administration budget cuts for law enforcement released a report showing that crime committed by meth addicts doubled in two years, to 6 million crimes in 2004.

"What is now beginning to catch everybody's attention is meth," said Richard Janikowski, a criminal justice professor at the University of Memphis.

Using addiction treatment as proposed in Matheny's bill, instead of just locking up addicts has proven to be successful, Janikowski said. Records show Tennessee led the nation in meth lab seizures for the three years before 2004. Related investigations have prompted child protective services case workers to get court orders removing hundreds of children annually from the custody of meth-abusing parents.

"It is sort of the new thing that has hit everybody in the face," Janikowski said. "It truly is an incredibly addictive drug. Meth addicts start suffering physical degeneration rapidly

"Warren County Sheriff Jackie Matheny, who is not related to the lawmaker, said he supports building a treatment center for meth offenders. He said there are people "in jail now that are drug-induced mental patients. It can get quite costly."

Despite the new focus on meth, Tom Farmer, a Hamilton County narcotics officer who works with the federally funded South/East Tennessee Meth Task Force, said other addictive drugs have not disappeared. "I think crack has stayed pretty consistent," he said.

Tennessee Department of Correction records show 1,800 inmates enrolled in substance abuse programs. A department official estimates that about 50 percent are receiving treatment for crack and cocaine abuse, 40 percent are receiving treatment for meth and 10 percent for marijuana and other drugs. Leah Young, a spokeswoman for the Rockville, Md.-based Substance Abuse and Mental Health Services Administration, said a national survey shows abuse of methamphetamine and cocaine both stayed flat from 2002 to 2004, with a higher rate of cocaine usage.

"We need treatment, period," Young said. Phillip Lovelace, president of the Tennessee Drug Awareness Council in Nashville, said crack cocaine is still as bad a problem for urban Blacks as meth addiction is for rural Whites.

But he said the thinking has changed since crack cocaine appeared in the 1980s: "We didn't get ahead of crack cocaine," Lovelace said. "We've gotten ahead of meth."