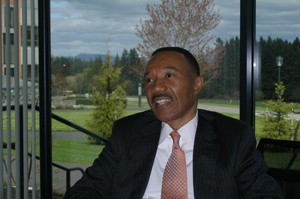 Former congressman and NAACP president Kweisi Mfume spoke in Vancouver, Wa. last week at Fort Vancouver High School.
Although Mfume has largely kept a low profile since leaving the NAACP in 2004, he took to the political circuit to stump for then-presidential candidate Barack Obama. Speaking at one of the most diverse high school's in Vancouver, Mfume's speech centered on "Race, Class and Economic Recovery in Obama's America" as part of the annual Public Affairs Lecture Series
Before the speech, he sat down for a discussion about criminal justice reform, responsibility, the economy and class in America.
"The issue of class trumps everything," he said. "It's the new dynamic of this century. I don't know if we as a society, particularly as a capitalistic society, have to come to grips with the issue of class, since capitalism breeds class. Suffice it to say, it creates as many problems as it solves."
The issue of class resonates particularly with Mfume's humble beginnings. He was born in Turners Station, Md., a Baltimore suburb, to a single parent household. His mother died when he was just a teenager, causing Mfume to drop out of school to support his brothers and sisters. He was arrested multiple times in connection with gang activity as a youth, but turned his life through education.
"I didn't find out who my real father was until the night of my mother's death," he said. "I had to put myself back in school after running around with gangs to get my GED at the age of 23. It was still a process of putting one step in front of the other, so further down the road, you better your condition."
One of the best things to come out of Obama's election to the nation's highest office, he said, is to show youth that, no matter their place in life, they can overcome obstacles to succeed.
"You should not allow your circumstances dictate where you go," he said, noting the importance of policy reform and a bit of realism. "Not everybody is going to be president of the United States.
"I've always believed the best social program is a job, but jobs are not enough. It's not enough to have full employment, there has to be full development. That means they have to provide for retraining in an ever-changing society. The cracks that people fall through tend to be larger, and it's not segregated to Black men, it's poor Blacks, it's poor Whites, poor Latinos."
Criminal justice reform is beginning to see light as a component of economic recovery and an improvement of human rights in America. Sen. Jim Webb, D-Va., submitted legislation calling for a blue ribbon Criminal Justice Commission to investigate the totality of operations of a system that houses 25 percent of the world's prisoners and considered by many to be fundamentally broken.
Mfume said one of the key components of reforming the criminal justice system is repealing mandatory minimum sentencing structures that have contributed to extreme racial disparities, mostly among non-violent drug offenders.
"These mandatory minimums create a situation to where we do what we don't want to do," he said. "We take away discretion from judges who are dually appointed to preside over matters and use their better judgment of sentencing and discipline. But when they're locked into a mandatory minimum, where we don't care about circumstances and facts of this case, if there is a guilty verdict, here is what we have to do, it has slowed the process of doing away with those disparities."
He also says personal responsibility plays a part in reducing disparities, although he admits African Americans have a history of an increased police presence in their neighborhoods.
"I think there is a tremendous responsibility on young Black men to use common sense in attempting to avoid the CJS altogether," he said.