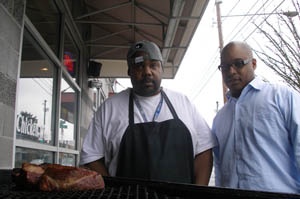 Despite a slow economy, starting up Traiel's Food 4 The Soul was what Jermaine Atherton felt was the right thing to do.
"I always felt comfortable here," says the entrepreneur, who also is president of P.O. Soul Entertainment, a gospel recording company. "It was the right thing and it was in God's plan."
Open since November 2008, the new barbecue restaurant at 300 N. Killingsworth St. is slowly becoming Atherton's dream – a community gathering place.
"We're trying to make it a staple in the community," he said.
Serving up all-natural meats, homemade sauces, vegetarian and vegan side dishes, Atherton and head chef Tracy Bell say the menu reflects their commitment to the neighborhood. They use local companies to supply their ingredients and try to keep things tasty and pure. And they want to cater to those who don't eat meat or keep their meats and veggies separate.
"Veggies are veggies, meats are meats," says Bell, a graduate of the Western Culinary Institute and former operator of the Rib Shack on Mississippi Avenue. "We definitely believe in a nice flavor for everything, but you should be able to experience southern cuisine without being offended. We don't want to turn anyone away." 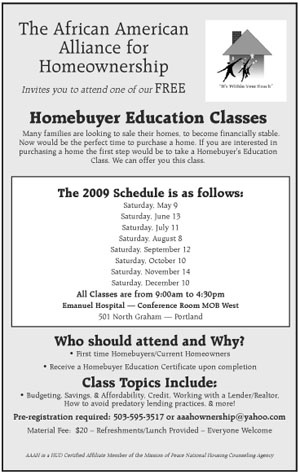 Atherton says that as the community changes, so does the food. They're constantly experimenting with new menu items and are working to perfect a tofu sandwich, tofu smoothie and fried mac and cheese. Bell says he's perfecting a number of different wing sauces, the right kind of wood for smoking meats and
"We should be known for our vegetarian fare," Atherton says.
Although they retain the many staples of traditional soul food, they are offering a healthier fare – in the kitchen and the dining room. They've taken down the big screen television that was up when the restaurant was under different owners and covered the walls with art from local artists; they won't be serving any liquor or beer; all to-go containers and utensils are made from bio-degradable materials; and they've been holding open mic nights for mostly gospel artists, special community events.
Mostly, Atherton wants his establishment to be a source of positivism for the community.
"It's going to take a community to change the community," he said.