Honoring the Life of My Dad, Wendell Wallace 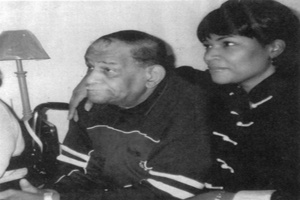 My father was larger than life to me. A man of modest beginnings, Wendell Wallace had the faith to move mountains, and move mountains he did. In the late 1960's I witnessed him break down the walls of racial prejudice. The congregation of Metropolitan Church of God marched to our new church location on 12th & Skidmore. He renamed the church Maranatha Evangelistic Center; he was a true Evangelist at heart. Little did the small congregation of about 75 people know that hundreds of hippies would descend upon our place of worship to become members. The cultural differences were quite evident. It was not uncommon to see a sistah wearing her finest Sunday morning attire sit next to someone who wore a psychedelic t-shirt and no shoes. My father saw to it that each of the members practiced the Golden Rule – "Do unto others as you would have them do unto you." I witnessed walls of "attitude" come down.
Two years after we moved to Marantha I married a young evangelist named Aaron Johnson. We had a huge church wedding where my father proudly walked me down the aisle, and performed the ceremony. He chose Aaron my husband. Whatever my father would ask of me I would do. My daddy was the most important man in my universe. He became so excited when he learned Edwin Hawkins was going to be Aaron's best man. I asked Tramaine and Walter Hawkins to sing to top it off. This made daddy even happier! The next day after the wedding the Hawkins family had a concert at Marantha. Many people who are still living in Portland remember the thousands of people who flocked the inside and outside of the church. The streets were packed with the song "Oh Happy Day" being sung to its fullest. These were happy times.
My dad was not a hell-fire-and brimstone preacher. His message was more about love, forgiveness, and acceptance. When my sisters Marcia, LaNita, Angie, and Joy, and my brother Wally would sit around the fireplace that my father built; my parents would talk about how we should treat each other. Their motto was "Be kind one to another."
It broke my heart when kindness was not shown to my mother in 1973. My father asked for a divorce and remarried. If he could relive his life, I believe his choices and actions would have been different. After the divorce, his relationship with his six older children was broken, and this broke his heart. Later he and his wife were blessed when two additional children were born into my dad's clan, a boy named Jason and a beautiful little girl named Wendee. The joys of his remaining years were Jason, Wendee, and his three children Isreal, Meshak, and Evie. His other 11 grandchildren will learn and get to know him after his death. He was a kind and loving man. However, his childhood left many scars on his heart, and he suffered in not knowing how to reach out and show love to some of the most important people in his life – his family.
One week before he died my sister, Angie, her family and I went to visit. Little did we realize it would be our last time seeing him alive. He looked into my eyes and in his unique way communicated, "Go and do what I didn't do very well – LOVE my children."
Wendell Wallace was born in Kansas City, Mo. in 1923 and died this year at the age of 85. If you'd like to know more about the life of my dad, please go to his website www.wendellwallace.org. God Bless You!