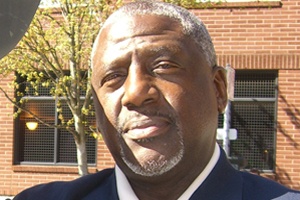 In February 2007, when businessman Bruce Feathers was considered as an "instrumental" symbol of small businesses' rising prosperity, then-City Commissioner Sam Adams scheduled a visit to Feather's warehouse on Northeast Martin Luther King Jr. Boulevard.
The appointment, it was agreed, would serve as testimony of Adams' consistency in championing small business, particularly those owned by minorities and women. It would also celebrate Feathers' success in helping Toronto-based Precise ParkLink win a $1.4-million city contract to upgrade 650 of Portland's 1,137 SmartMeter machines  - considered the wave of the country's parking future.
"He seems like a nice, good guy," says Jeff Baer, head of the city's Bureau of Purchasing. "Others would say this too, he's very passionate about making sure minority, women and emerging small businesses have an opportunity."
Now that passion for making sure minority businesses are able to land the big contracts — with which Feathers has built a nationally recognized import and distribution enterprise – has unexpectedly boomeranged back to hurt his business in a conflict with city officials now headed for the courtroom.
Feathers, represented by attorney Jim Francesconi, a former city commissioner, has filed a lawsuit against the city claiming Ellis McCoy — the city's manager of parking operations – interfered with the relationship between Precise ParkLink and Feathers and conspired to push Feathers out of the joint-venture partnership with the Canadian parking-solutions company.

Gaining Leverage
According to Feathers, McCoy wanted to leverage his relationship with FeatherLite to leave his city job and start a consulting business. When that didn't work out, Feathers claims, McCoy retaliated.
What's more, based on documents included in Feathers' tort claim, the city is conducting an internal investigation into whether McCoy - who is behind Portland's decision to be the first major city to buy the solar-powered Smart Meters – got a little too cozy with Feathers and Precise ParkLink, companies that McCoy did business with on behalf of the city.
Deputy City Attorney Lory Kraut refused to comment about both the personnel investigation and Feathers' allegations.
McCoy, however, characterizes Feathers' claim that he sought employment with FeatherLite as "absolutely ridiculous." He also says he was blindsided by his generous attempts to help Feathers.
"I was doing him a favor," McCoy says, "and doing the city a favor by mentoring him."
Several Black ministers, including Bishop A.A. Wells, support Feathers' version of events and say they plan to pressure City Hall to intervene, just as they did after the 2003 police shooting death of 21-year-old Kendra James.
"We believe that the gravity of this matter rivals some of our major battles of the past for urgency and attention," says Wells, a longtime member of the Albina Ministerial Alliance.
Feathers says he was unfairly targeted for treating McCoy like he did any other business client. He says he paid for McCoy's meals and at least three times, McCoy accepted Feathers' third-row-from-the-floor season tickets to Trail Blazers games.  "It's really nice of you to offer when the ticket is free so any game is great," McCoy wrote from his personal email account in a Feb. 12, 2006 email to Feathers.
According to documents in Feathers' tort claim, McCoy also showed up in Toronto when Feathers was meeting with Precise executives and was wined and dined by company executives who, at that time, Feathers says, were still preparing to submit a bid on the 3-year city contract to upgrade the green, downtown SmartMeters to real-time credit-card authorization.
McCoy says it's only a coincidence that he was vacationing in Toronto then. "I told Bruce I would be going up there," McCoy says. "It's a nice place."
According to emails, McCoy regularly expressed an interest in becoming Feathers' advisor on parking issues. "Most of the information about Smart Meters is in my head," McCoy wrote in a 2006 email to Feathers, "and I'm of course happy to share."
McCoy also tweaked Precise's bid documents before they were officially submitted, according to emails submitted in the tort claim. He also advised Feathers on how much to pay the SmartMeter technicians to make the numbers pencil out better.
"We see this as a win/win/win for the city, FeatherLite and Precise…,"  Precise's President Pete Groccia wrote in an Aug. 13, 2006 letter to McCoy and Baer a few weeks before being awarded the $1.4 million SmartMeter contract, which was overseen by McCoy. Feathers, Groccia wrote, "is the epitome of the city's initiative to support, develop and grow minority, women and emerging small business."
According to Feathers, he and McCoy eventually talked about partnering in a new division of FeatherLite, called FeatherLite ParkLink, detailed on Feathers' company website. The strategy was to leverage access to the SmartMeter machines and then lease some of them to restaurants, residential high-rise towers, hospitals and other businesses with parking lots.
"Ellis kept hinting at it for weeks," Feathers says. "He initiated the conversation."
Explains McCoy: "Frankly, I told him, yes I'm interested, at some point, in going into business for myself." But, he adds, the FeatherLite ParkLink proposal was all Feathers' idea.

Later in 2006, McCoy started pitching to the city an idea that Portland's Office of Transportation sell the bulk of its SmartMeter machines  – which it had purchased for about $6,100 each - to Foreve Capital Management, which is Precise's financing partner, for about $9.5 million. As part of the deal, the city would pay $12 million over five years – about $2,100 per machine - to lease them back, but the city would still get the revenue from the machines.
Portland would also pay about $3 million - $591,000 a year - for the Precise-FeatherLite joint venture to keep the machines in good working order. According to emails to Feathers from McCoy's msn account, McCoy even helped Feathers craft the right wording to express support of the idea to the city.
"I made just a few changes adding some language … and I changed the tone of the message slightly correcting the proper value of the deal and being more specific about the Precise role 'refurbish/rebuild of meters,'" McCoy emailed Feathers on Nov. 5, 2006.  "I also added the context of working in concert with existing staff."
In January 2007 – from his home email - McCoy sent Feather -a two-page résumé and a six-page business plan marked with McCoy's initials, EKM, for Feathers to share with his board.
"That was just another part of me helping him," McCoy explains.
A few months later, Feathers says, he and McCoy talked about their proposed business venture over lunch.  Feathers expected FeatherLite ParkLink to earn about $50,000 a month, but he first intended to pay off his long-term business investors. So, Feathers says he offered McCoy an equity ownership, with an annual salary of just $60,000.
"That's when he got mad," Feathers says. "He was basically not only disappointed, but personally insulted. From that day on, our relationship went downhill."
Quickly, Feathers says, he found himself on the outs of the relationship between McCoy and FeatherLite's joint venture partner, Precise ParkLink. McCoy admits freezing Feathers out of the communication loop, but he says he was mad about a racial remark he says Feathers made.
"At that point, I walked away from him," McCoy says. "I stopped answering his calls."
In October 2007, police investigated a theft complaint against Feathers' two meter techs. Although Portland Police dropped the investigation after the employees passed a voluntary polygraph, McCoy still aggressively lobbied Precise to get rid of FeatherLite as a subcontractor, according to documents. McCoy also asked Baer, the city's procurement director, to find another minority- or women-owned business that Precise could use as a replacement.
"Ellis reached over and tried to usurp the authority of the procurement department," says Feathers, who co-chairs a committee with Baer to formalize the MWESB standards on city contracts for goods and services. "If some things were a problem, you have a process, but the last thing you do is go for a dismissal."
Frustrated by McCoy's actions, Feathers sought intervention from his political associates in City Hall, particularly Mayor Adams, who oversees the city's transportation bureau. In February 2008, McCoy emailed this directive to Feathers:  "If you have questions for the City about the separation (from Precise), I will serve as your contact."
Meanwhile, the SmartMeters "sale and lease-back" plan was briskly moving forward. McCoy assured the city that it was a good deal because it would eliminate the financial risks around maintaining the machines, since the original five-year warranty expired. But Auditor Gary Blackmer, who complained that he had been kept out of the loop about the "sale and lease-back" plan, asked the City Council to put the brakes on moving forward with its support.
"We have significant concerns about the rationale" for this "unusual" proposal, Blackmer wrote in a July 2008 audit. He added that the transportation department hadn't done its due diligence in justifying the money that has already been spent on SmartMeters, as well as tracking maintenance costs, monitoring customers' satisfaction or processing bank card transactions. Susan Keil, the city's transportation director, included a five-page response letter in the audit, justifying her support of the sale-and-lease-back plan. But now, it's completely off the table.
"We did look at it as an option, but decided that it was not financially advantageous for us," Keil says. "It's dead. It's gone."
McCoy says it was never his idea anyway. "It was a group thought," he says.
Despite what the city's ongoing internal investigation of McCoy ends up saying or how Feathers' potential lawsuit plays out, Feathers says McCoy's actions have strained his relationship with Toronto-based Precise ParkLink,  which has since reconsidered its decision to use FeatherLite Enterprises as the location for its North American headquarters.
Some observers say that begs the question: If the city's MWESB policies and procedures can't protect the guy who helped design them – and who was once considered an "epitome" of the city's commitment to their success - then what kind of message is the city really sending to the other minority- and women-owned businesses who want to compete for a bigger slice of the city's business contracts?
"I do believe that the city has a continuing interest in advancing minority contracting and therefore continuing to work with Mr. Feathers," Francesconi says. "Both looking backward to correct the wrongs and looking forward in a productive way is what I think both the city and Mr. Feathers would like to have happen. And I'm hopeful that will occur."