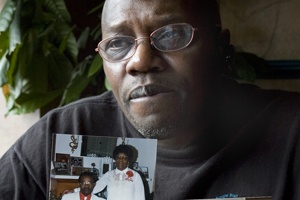 Jerry Thompson says he was just trying to help out when a distant, elderly relative started having trouble caring for herself in her home last year.
Clio Simpson, 90 at the time, had no immediate relatives nearby after her husband passed away. Although Jerry and his mother Loretta were already providing in-home care for his grandfather Dock Thompson, Simpson's 98-year-old first cousin, the mother and son say they became alarmed at finding strangers in Simpson's house during a chance visit.
That's when a series of misunderstandings between the Thompsons and what turned out to be social workers and medical helpers sent by the county pulled the Thompson family into the twilight zone of Oregon's unregulated private guardianship industry.
The family – accused by social workers in court of having no relationship with Simpson and intending to steal her money – has been thoroughly investigated by police but not charged with any crime.
At the same time, documents filed in court by the attorneys of the guardianship company now in possession of Simpson's affairs, showed errors in the billing paperwork for Simpson's legal representation that went unnoticed by the battery of professionals meant to safeguard her interests.
"All I'm asking is, if all these elderly people are judged to be incompetent," Jerry Thompson says, "who do they complain to when they have a problem?"

Unregulated System
Everyone knows that orphaned children are made wards of the state and placed into the custody of responsible adults.
But what happens to orphaned adults deemed incapable of taking care of themselves?
In Oregon, private guardianship companies are called in by county officials when people with financial resources are deemed by the court to be incapable of managing their affairs, but have no family members to care for them.
Under the supervision of the Probate Court, these individuals are placed – along with all their property, bank accounts and other assets – into the custody of such companies.
Indigent adults – those without any assets – are taken in by the county and given shelter and services in a government-run system.
However the state or county does not license private guardianship companies. A nonprofit organization called the National Center for Guardianship Certification, based in Pennsylvania, has since 1994 offered a professional certification process accepted by courts around the country as the standard qualification for the industry.
Rules about such companies vary from state to state. However a rise in concerns about elder abuse has prompted many companies in the industry to institute higher standards.
"As there are private social workers and private nurses and private attorneys and private whatever you care to name, there are private guardianship companies," said Multnomah County Public Guardian Holly Berman.
She says the industry is not regulated by any government agency, but it is under the control of Probate Court judges, who in Multnomah County make the final decision about where elders are placed with the help of a two-person staff of investigators and the testimony of social workers.
"The court makes the decision and the court has the responsibility to monitor the individual," Berman said.
The issue of safeguarding the interests of elderly and infirm Oregonians can be a matter of life and death, Berman says.
"As we look at the growing population of aging people, there is a real need to protect the vulnerable," she says.

Forgetful But Healthy
By last spring, Jerry and his mother Loretta Thompson had already spent several years nursing Loretta's father, Dock, in his home. They say when they went to visit Simpson she seemed forgetful but relatively healthy.
"She didn't seem that bad, really, all she needed was someone to care for her in her home," he said. "She might not know what day it is, but her health was good."
Thompson says he spent a few weeks setting up Simpson's bills for automatic payment, driving her to get groceries and to doctor's appointments and picking up her prescriptions.
Soon, however, the Thompsons butted heads with a Multnomah County social worker sent to Simpson's house by Adult Protective Services. The social worker and medical helpers had filed papers with the Probate Court stating that Simpson was a danger to herself in her home, and advising that her care and assets be turned over to a private guardianship company.
Jerry and the social worker ended up in an argument over the recommendation. On May 5, 2008, the social worker filed a restraining order against Jerry Thompson in Simpson's name, alleging that Thompson put Simpson "in fear of significant physical or emotional harm," and that a police complaint had been filed alleging Thompson withdrew money from Simpson's checking account and made a cash purchase at a local grocery store.
"Respondent was seen writing checks on petitioners checking account for bills that are automatically debited from her checking," the restraining order says. "He has a criminal record and petitioner is afraid of him and he unduly influenced petitioner to contest the guardianship petition that was recently filed."

Unfounded Accusation
The restraining order against Jerry Thompson was granted the day it was filed, marking the end of Thompson's visits to Simpson's house, but the beginning of a months-long process of having the restraining order lifted.
Neither Simpson nor the caseworker nor anyone from the guardianship company attended any of the hearings, which were rescheduled twice to make sure Simpson had a chance to testify in court. At one hearing, the presiding judge remarked that it was unclear whether Simpson ever received or understood the court notices sent to her home.
The order was eventually thrown out, but remains on Thompson's record.
The Probate Court hearing to decide whether Simpson and her assets, valued at some $300,000, would be given to a guardianship company, was held before Jerry Thompson's restraining order was lifted. His mother Loretta Thompson's arguments in court that she and Simpson were related were brushed aside, as she could produce no paperwork or documents proving a family tie.
Simpson, who did not attend the hearing, allegedly told caseworkers that she didn't know either of the Thompsons, although all involved agreed that Simpson suffered from dementia.
The only other thing that all sides agreed on was Simpson's desire to remain in her own home.
But by the end of the hearing, Simpson, her bank account and her Northeast Portland house were all awarded to a company called Tiffany O'Shea, which moved her into an adult foster home by the end of the summer, and received permission from the court to put her house on the market by the end of the year.
Michael O'Shea, co-owner of Tiffany O'Shea, told The Skanner that his company is dedicated to helping its elderly clients live out their lives in dignity, without becoming prey to scammers and the catastrophic accidents that often injure the infirm elderly who live unsupervised.
"Many times, many times our cases involve people who have already been taken advantage of mentally or physically," he said.
He and his business partner are licensed and bonded, are fully compliant with the industry standard, and typically answer to "the family, public officials, county officials, the judge."
"In short we are highly watched trying to do a difficult job," he said. "People make all kinds of allegations against us but once it gets in the paper it never goes anywhere."

A Long History
Clio Simpson and her cousin Dock Thompson were both born in Texas about 100 years ago. Over the decades they and their families relocated to Northeast Portland. Family photos and documents show that Clio and her husband Eddie, her brother Oralie, Dock and his wife Marie supported each other through hard times.
One photo shows Dock Thompson and Clio Simpson standing behind Oralie, who is wheelchair bound after a leg amputation.
A notarized document provided to The Skanner by Jerry Thompson shows that when Marie Thompson became too elderly to manage her affairs in 1991, Clio Simpson was the witness to Dock Thompson's petition for power of attorney over Marie's affairs.
But at Dock Thompson's ornate funeral, held March 29 at the Mt. Olivet Baptist Church – he died aged 99 years and one day — Simpson was notably absent, despite being listed among Thompson's survivors in the funeral notice.
Jerry and Loretta Thompson, a retired nurse, were repeatedly praised throughout Dock's funeral for continuing to care for him at home for years rather than place him in a facility.
The Thompsons say that Simpson was invited to attend the funeral, where Georgia Newton Smith, a family friend, movingly read Dock's obituary aloud, naming Simpson as one of his survivors.

A Billing Error
The Portland Police confirm that, although the investigation into Jerry Thompson's alleged theft of funds from Simpson generated an 18-page report, no charges have ever been filed.
On the other hand, The Skanner's recent examination of Simpson's Probate Court records show that Timothy M. McNeil, of The Elder Law Firm, which has represented Simpson in court on behalf of Tiffany O'Shea, has billed her estate $190 per hour for court services retroactively to March 2008 – even before Tiffany O'Shea gained custody of her.
Yet McNeil's cover letter filed with the court, dated Dec. 16, 2008, states: "The hourly rates charged ($180.00 for attorney time; $85 for legal assistant time) are reasonable in light of the duties undertaken, the experience of my office in providing these services, and the prevailing rates in Oregon."
McNeil told The Skanner that the billing error was a simple mistake in the paperwork, in which the cover letter had not been updated to reflect a change in his per hour rates in 2007. He said that Simpson's estate had not been overbilled, and that his clients were aware of and agreed with the fees actually charged.
He added that throughout Simpson's case, professionals such as the county caseworker, the court investigator and Simpson's court-appointed attorney acted as her advocates.
Also, he said, the Oregon Long Term Care Ombudsman currently receives notice of all the paperwork that's filed with the Probate Court.
Nevertheless, none caught the attorney's paperwork error. [To read the documents for yourself click here then scroll down]
Unlike the foster care system for children in Oregon, where the state Justice Department has recently launched a wide-scale review of individual cases, elders in private guardianship are at the mercy of the Probate Court's ability to monitor their situation.
As for individuals who might opt to step in and question how the process works, like the Thompsons, the system can be unforgiving.
"I feel like I've been racially profiled," Jerry Thompson says. "I can't even take Clio to the grocery store and help her pay for her groceries without being branded a criminal? Meanwhile these people are billing her estate for every single thing they do.
"I doubt she even knows that."