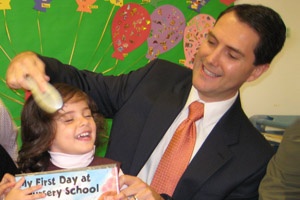 If you think the competition is fierce to gain entrance to the country's elite colleges, then you oughta get a load of the cutthroat tactics employed by parents of toddlers to get their little monsters into the country's exclusive pre-schools. That's right, pre-schools.
"Nursery University," directed by Marc Simon, follows four couples and a sixty-something single-mother of twins as they endeavor to get their tykes admitted to one of New York City's top preschools where tuition can be as high as $40,000 a year, matching the cost of an Ivy League education. Why so expensive? $40,000 may seem like a lot to pay so your kid can have the privilege of finger-painting around other privileged tykes, until you realize that these nurseries are now seen as feeder schools for the Ivies.
Furthermore, the alternative is clearly unacceptable in the minds of the members of this stuffy set. Typical of their attitude were the words of a well-heeled White woman who looks like she has never set foot in the 'hood who, without a shred of shame, whines, "We're not going to have him go to a public school in Harlem," when speaking about her precious 3-year-old.
There are about 15 applicants for every available spot, and as one proud papa puts it, "Pre-school is the first step into getting your child into the college of your choice." The tension mounts during the family interviews when the directors, principals, teachers and administrators size up each candidate to determine whether he or she exhibits sufficient promise to cut the mustard in their program.
The parents' anxiety levels peak in anticipation of March 6, the day on which all the pre-schools simultaneously send out their acceptance and rejection letters. And just as with the college process, you don't want to get any thin envelopes in the mail.
Still, there's something a little disgusting about pitting toddlers versus other toddlers academically, even if they're too young to understand what the fuss is all about. What's next, an SAT test for newborns? A riveting expose' of what looks an awful lot like child abuse in the name of quality education.

To see a trailer for Nursery University, visit: http://www.youtube.com/watch?v=aESkMeVksvs