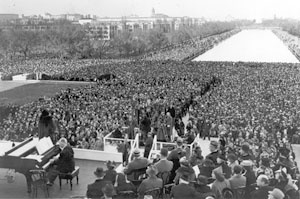 WASHINGTON (AP) - Marian Anderson couldn't sing at Constitution Hall or even a local high school because of the color of her skin. So the opera singer performed on the steps of the Lincoln Memorial in April 1939 and sang "My Country, 'Tis of Thee.''

Unlike other events then, the 75,000-person crowd that had gathered to hear the African-American woman sing wasn't segregated. Blacks and whites stood together. Senators and Supreme Court justices also came on that Easter Sunday. The event came to symbolize the ideal of America's racial equality.

On Sunday afternoon, 70 years later when the U.S. has its first black president, there will be another free concert at the Lincoln Memorial, this one designed to commemorate the 1939 landmark event. The Sunday concert will incorporate songs from Anderson's event and remember its significance during America's era of racial segregation.

A modern African-American opera star, Denyce Graves, will sing classical songs at Anderson's anniversary concert. The Chicago Children's Choir, the women's a cappella group Sweet Honey in the Rock and the U.S. Marine Band are also scheduled to perform.

Former Secretary of State Colin Powell will recite excerpts from President Abraham Lincoln's second inaugural address in 1865 during the concert. Following the hour-long performance about 200 people will be sworn as U.S. citizens, symbolizing the rights all Americans are guaranteed.

"To me, it's just very dramatic,'' said Josephine Pesaresi, 75, the daughter of Justice Hugo Black, who attended the 1939 event. "People are younger, they don't realize what huge things have happened and how far we have come. It makes me weep, I'm so happy.''

Pesaresi, who will be present at Sunday's concert, says it makes her recall how her father had grown in his racial outlook. Black, once a member of the white supremacist Ku Klux Klan, later joined a unanimous Supreme Court in outlawing segregation in public schools in 1954 and often voted with the court's liberal wing on civil rights cases.

"He and my mother went to that concert, because he so firmly believed in equality,'' she said.

It's a time to reflect "where we were then, where we are now, and how far we have to go,'' said Raymond Arsenault, who has written a book on Anderson's concert and has consulted with the Abraham Lincoln Bicentennial Commission. The commission and the National Park Service are sponsoring the event.

Seventy-year anniversaries ceremonies aren't that common, but the Bicentennial Commission decided to hold the concert this year because it coincided with the 200th anniversary of Lincoln's birthday. Organizers view Anderson's concert as a major step in the advancement of civil rights that Lincoln helped inspire.

The anniversary performance also occurs within the first 100 days of Barack Obama's presidency.

Arsenault said the 1939 event wasn't just a concert. "It was this sort of crack in the mold; it just showed people this alternative vision of what America might be like if it lived up to its goals of liberty,'' he said.

Anderson grew up in poverty in South Philadelphia, but she became famous in the 1930s, performing for royalty and in major concert halls in Europe, New York and Philadelphia.

When her manager tried to book Anderson at Constitution Hall, the largest venue in segregated Washington at the time, she was rejected by the Daughters of the American Revolution, which owned the hall and prohibited African Americans from performing there. The district's school board also turned her away from singing at a school's auditorium.

"She had sung for crowned heads of Europe,'' Arsenault said, "but she couldn't sing in her own nation's capital.''

First lady Eleanor Roosevelt resigned from the DAR in protest. She and then-Interior Secretary Harold Ickes, along with a coalition of black and white community leaders, mobilized to have Anderson sing at the Lincoln Memorial.

When President Franklin D. Roosevelt was asked for his approval, Arsenault said that the president declared "she can sing from the top of the Washington Monument if she wants to.''