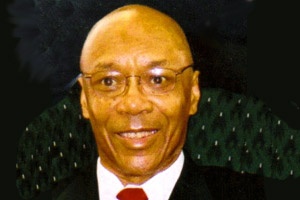 Leo Frank Thornton has died on March 25. He was 86.
Frank was born in Morrilton, Ark., March 4, 1923 to Mable Brame Thornton and Frank Thornton, the eldest of five children. He was an extemporary child who got along well with everyone and set an example for his siblings. He had a wonderful life, with his mom and dad, sister and brothers. It was in his early adolescent years that he accepted the Lord Jesus Christ as his personal Savior.
Frank received his education in public schools in Arkansas and his training in the U.S. Army. In 1940, he was stationed at Fort Riley Kansas. He served in the 1st Calvary Division in the days of horseback soldiers and advanced warfare. He later served overseas in Italy in the Transportation Corps. He was honorably discharged in 1945.
He returned to Morrilton for a brief period, and moved on to Portland to join other family members. It was there that he met and later married the love of his life, Eva Mae Adams. They continued to reside in Portland and there began their family. Together they raised 7 children. He was a devoted family man and a skillful barber in his early career and later retired as a professional butcher.
Frank and his family attended church faithfully and he could be found working diligently wherever needed. He continued to serve the Lord and stayed on the battlefield for over 30 years until recently when his health began to decline.
He leaves to mourn: his children, Norah Garfield Patterson of San Diego, Calif., Johnnie Marie Summers, Willie Deannia Zickrick, Theoskei Lee Patterson, Linda Louise Thornton and Theresa Joyce Thornton-Woods all of Portland.
He also leaves to mourn his grandchildren: Keith Washington, Kevin Washington, John Summers Jr., Abens Thornton, Jeff Summers, Heidi Patterson, Cameron Zickrick, Idris O'Ferrall, Azelle Hall and Iyona Woods.
Frank will also be missed by brothers; Charles A. Thornton (Helen) of Columbia, Md., George W. Thornton of Santa Ana, Calif. and James A. Thornton of Belkview, Ill.; his nieces, nephews, great nieces and great nephews and a host of relative and cherished friends.