Steve Cross talks with Dedan Gills and Belvie Rooks at the second Green Festival March 28 and 29 at the Convention Center.  Gills and Rooks spoke at the popular event which drew thousands of people.  The couple runs an organization called Green Global Heart whose goal is to plant one million trees along the West African Trans-Atlantic Slave Route as a living memorial to the thousands who lost their lives during the slave trade and by doing this help combat global warming. 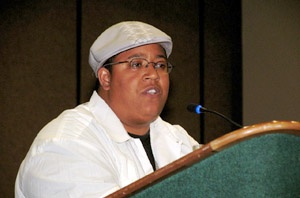 Malkia Cyril, the founder and executive director of the Center for Media Justice in Oakland, Calif., speaks to an enthusiastic audience about the importance of an independent media to the environmental movement at the Green Festival.