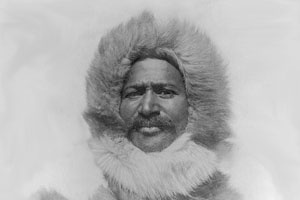 Mount Laurel, N.J. (AP) - An Arctic explorer often overlooked for his accomplishments is about to receive some overdue recognition.
A life-sized statue of Matthew Henson is to be unveiled Monday outside a former Camden church that one group is trying to turn into a maritime museum.
The unveiling marks the 100th anniversary of Henson's arrival at the North Pole.
A century later, there's still a debate over which exploratory team was the first in the international race to reach the North Pole. Most often, Admiral Robert Peary gets the credit for finally reaching it on his ninth effort. Later, Capt. Roald Amundsen, who discovered the South Pole, called Peary "the greatest explorer since Christopher Columbus.''
For decades, Henson, who was black, rarely received credit for exploring alongside Peary on all his trips into the Arctic and reaching the North Pole 45 minutes earlier.
"There was no recognition of him because of his race for almost 40 years, while Robert Peary, who died in 1920, was weighted down with the highest honors this nation could bestow,'' said Father Michael Doyle, a pastor and a member of The Camden Shipyard and Maritime Museum Board.
Later in his life - and after his death in at age 88 in 1955- Henson has become better known. In 1944, he received a Congressional Medal of Honor. He was honored by President Eisenhower in a 1954 ceremony at the White House.
In 1988, his remains were moved from a cemetery in New York City - where he lived most of his life after his explorations ended - to be buried next to Peary's at Arlington National Cemetery.
Two schools in Maryland are named after Henson, who was born in the state's Charles County.
Still, the organizers of the Camden museum believe that their statue is the first life-size likeness of Henson in the United States.
The group used a state grant to commission Haddonfield sculptor John Giannotti to create the work for about $40,000.
Michael Lang, a retired Rutgers University urban studies professor and a member of the museum board, said that Camden is a good place for the work because Henson lived for a time in nearby Philadelphia, and many of his expeditions launched there.
Further, the old Church of Our Savior, just a few blocks from a port, was strongly connected to the sea. In fact, Lang said, the stones for the parish house were brought back from Greenland from one of Henson and Peary's trips north, in 1891.
Lang said a significant part of the museum, which does not have a timeline for opening, will be dedicated to the Arctic journeys.
Doyle, an advocate for the poor who's been active in Camden since the 1950s, said there's another reason to honor Henson in a city that ranks as one of the nation's poorest.
"He was a homeless child who became a legend of achievement,'' Doyle said.