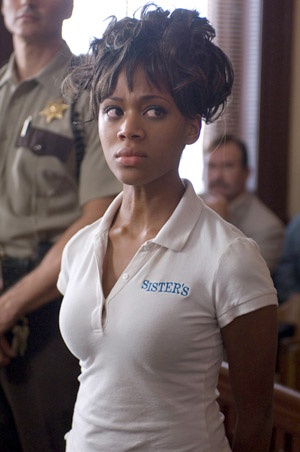 On April 26 the festival, in special partnership with the Seattle Latino International Film Festival, presents and the West Coast Premiere of Celia The Queen, a documentary about the legendary Afro Cuban diva queen of salsa, Celia Cruz. The film's director, Joe Cardona will be on hand to discuss his work.

The festival includes a number of thoughtful, inspiring and irreverent entries from emerging and established filmmakers from across the U.S. and around the globe, including a Hip-Hop Film Mini-Fest, a GLBT Film Mini-Fest that specifically addresses lesbian and transgender issues, and a Katrina Film Series that spotlights the disaster from three unique perspectives.

A wide array of talkbacks, panels and workshops are peppered throughout the festival and provide a much needed bridge for artists and community patrons to engage in meaningful dialogue.

The Festival spotlights over 40 feature-length and short films by independent filmmakers, and includes panel discussions, workshops special screenings for senior & youth and the rare opportunity to chat face-to-face with prominent filmmakers, industry professionals and community leaders.

This annual event is expected to draw over 1,000 people who are passionate about creating and appreciating films by and about Black people in the world.

·   American Violet – (4/18 7 p.m.) Based on the astonishing true story of Regina Kelly, a waitress wrongly arrested during a disastrous drug sweep in Hearne, TX. Her refusal to accept a plea bargain eventually helped expose the DA's case a sham, based almost entirely on the word of a pathological informant. Starring Nicole Beharie and Alfre Woodard. www.americanviolet.com

·   Celia the Queen- (4/26 4 p.m.)The story of legendary Afro Cuban diva Celia Cruz, a woman whose voice symbolized the soul of a nation. Her reign as the queen of salsa, surrounded her with some of the most important 1970s-era figures of the genre. Features interviews with Quincy Jones and Wyclef Jean. Filmmaker Joe Cardona in attendance. www.celiathequeen.com

·   Us: A Love Story- (4/25 7 p.m.) A beautiful and haunting allegory exploring the relationships between Blacks and Whites. Filmmaker Alrick Brown in attendance. www.usalovestory.com

·   Medicine for Melancholy- (4/24 7 p.m.) A love story of bikes and one-night stands told through two African-American twenty-somethings dealing with issues of class, identity, and the evolving conundrum of being a minority in rapidly gentrifying San Francisco; the city with the smallest proportional black population of any other American city. www.strikeanywherefilms.com

·   13th Amendment- (4/19 1 p.m.) This documentary short follows a 90-year-old great-great-grandmother on her trek to vote for Barack Obama in the 2008 Pennsylvania primary. Having voted all her life, this is her first opportunity to vote for a black man for President.

·   Trouble the Water (4/22 7 p.m.) 2009 Academy Award nominee/Best Documentary. A redemptive tale of two self-described street hustlers who become heroes. They survive the storm and seize a chance for a new beginning; Not As Seen on TV (4/22 4 p.m.) youth documentary by four teens; Renaissance Village (4/19 1 p.m.) A gritty look at the delicate relationship between gov't and citizen post disaster. Follows the personal struggles of five characters who live in a FEMA trailer park where allegations of formaldehyde poisoning force the park to close. Filmmaker Lou Karsen in attendance.

·   Features B-Girl Be(4/23 4 p.m.) recognizes and celebrates the role of women in Hip Hop; 206 Zulu (4/23 9 p.m.) local filmmaker Georgio Brown in attendance; Masizake: Building Each Other (4/24 9 p.m.) local filmmakers Scott and Angela Macklin in attendance. Sabar (4/25 4 p.m.) An African American California born hip-hop girl resists the ancestral call of the Senegalese dance "Sabar." When she finally gives in, she discovers more than a dance -she finds herself. Filmmaker Chike C. Nwoffiah in attendance

·   February One – (4/20 4 p.m.) Based largely on first hand accounts and rare archival footage, the new documentary film February One documents one volatile winter in Greensboro that not only challenged public accommodation customs and laws in North Carolina, but served as a blueprint for the wave of non-violent civil rights protests that swept across the South and the nation throughout the 1960's.

·   The Prophet of the Slaves- (4/26 1 p.m.) Nat Turner believes that he is destine by god to deliver his race from bondage and leads the bloodiest slave revolt in U.S history.  This is a powerful narrative short by director Michael Flees that illustrates the passion and determination of a people brought to a country as chattel. www.theprophetoftheslaves.com

·   Sweet Old Song- (4/18 1 p.m.) Howard "Louie Bluie" Armstrong: acclaimed musician, NEA "national treasure," sly and charming personality. He is known for a lifetime of jazz, blues, folk and country music but when he met Barbara Ward, a sculptor 30 years his junior, a new chapter of his life/art unfolded. This is the story of their courtship and marriage drawing on nearly a century of African American experience, beginning with Armstrong's vivid stories/paintings of his childhood in segregated TN.

·   No Short Climb: Race Workers and America's Defense Technology- (4/21 7 p.m.) Presenting the contributions made by Black scientists and technicians recruited for military and civilian service jobs during WWII.

·   Frederick Douglass and the White Negro- (4/26 1 p.m.) Douglass escaped slavery and took refuge in Ireland during the peak of the Great Famine. This film examines the effect Ireland had on his activism, the role of the Irish in America after Douglass' return, and the turbulent relationship between African and Irish Americans as well as the race riot that rocked NYC during the Civil War.

All festival activities take place at the historic Langston Hughes Performing Arts Center on 17th & Yesler (104 17th Ave. S). Advance tickets available through Brown Paper Tickets www.brownpapertickets.com/producer/2303. Day of  show tickets also available at the Langston Hughes Box office. Opening and Closing night film events begin at 7 pm, are $15, and include a reception. All other evening showtimes are 7 p.m.  Sat/Sun. matinees at 1 p.m. & 4 p.m. Weekday matinees at 4 p.m. Late Shows at 9 p.m. Tues 4/21 -Sat. 4/25. Tickets are $ 7 for adults $5 for seniors and $2 for youth. An all-access "Langston Pass" is $75. Film details and ticketing information are available at www.langstonblackfilmfest.org or by calling 206-326-1088.