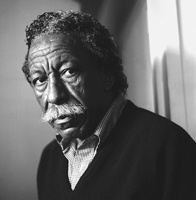 NEW YORK—Gordon Parks, who captured the struggles and triumphs of Black America as a photographer for Life magazine and then became Hollywood's first major Black director with The Learning Tree and the hit Shaft, died Tuesday. He was 93.


Parks, a true Renaissance man who also wrote fiction and was an accomplished composer, died in New York, his nephew, Charles Parks, said in a telephone interview from Lawrence, Kan.


"Nothing came easy," Parks wrote in his autobiography. "I was just born with a need to explore every tool shop of my mind, and with long searching and hard work. I became devoted to my restlessness."


He covered everything from fashion to politics to sports during his 20 years at Life, from 1948 to 1968.


But as a photographer, he was perhaps best known for his gritty photo essays on the grinding effects of poverty in the United States and abroad and on the spirit of the civil rights movement.


"Those special problems spawnedby poverty and crime touched me more, and I dug into them with more enthusiasm," he said. "Working at themagain revealed the superiority of the camera to explore the dilemmas they posed."


In 1961, his photographs in Life of a poor, ailing Brazilian boy named Flavio da Silvabrought donationsthat saved the boy and purchased a new home for him and his family.


TheLearning Tree was Parks' first film, in 1969. It was based on his 1963 autobiographical novel of the same name, in which the young hero grapples with fear and racism as well as first love and schoolboy triumphs. Parks wrote the score as well directed.


In 1989, The Learning Tree was among the first 25 American movies to be placed on the National Film Registry of the Library of Congress. The registry is intended to highlight films of particular cultural, historical or aesthetic importance.
The detective drama Shaft, which came out in 1971 and starred Richard Roundtree, was a major hit and spawned a series of Black-oriented films. Parks himself directed a sequel, Shaft's Big Score, in 1972.


He also published books of poetry and wrote musical compositionsincluding Martin, a ballet about the Rev. Martin Luther King Jr.