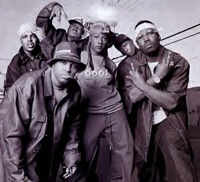 Forget the suspense over best movie or actor or actress — the real question on Oscar night was whether Three 6 Mafia could actually perform a cuss-free, non-graphic version of "It's Hard Out Here for a Pimp."


In one of the most exciting performances for a best song, usually characterized by bland performances of even blander songs, the Memphis rap group gave a rousing rendition of it's song from Hustle & Flow, then took the Oscar home to boot.


They are probably the only Oscar winners to pick up their trophy wearing throwback jerseys, sneakers and diamond-studded teeth. Though they thanked all the same people Phillip Seymour Hoffman would — their mothers, family, etc. — their euphoric, giddy delivery made the moment even more surreal.


It wasn't exactly something you'd see on the Source Awards, with the Fame-like dancers and choreography. But the performance from the group best known for their raw street-life rhymes stayed true to the gritty essence of the song.


Hustle actress Taraji P. Henson, who sang the irresistible hook in the movie, also belted it out on Oscar night (wearing a cocktail dress): "It's hard out here for a pimp, when you tryin' to get the money for the rent, with the Cadillac and gas money spent, you got a whole lot of witches jumpin' ship." Of course, "witches" was not the word used in the movie version. We'll let you guess which word that was.


Still, despite toning down the lyrics, Three 6 Mafia was bleeped once during it's performance because ABC censors thought they heard the f-word (a network spokesperson said they couldn't be sure what was said). And they got another bleep during their giddy acceptance speech, for the same reason.


Hey, it's hard out there for a pimp, if you didn't know.


It certainly was the most animated performance of the three Oscar-nominated songs on the night — and, surprisingly, the least garish.


The latter honor belonged to whoever came up with the staging for "In the Deep" fromCrash. Attempting to recreate one of the most riveting scenes from the movie, the stage was transformed into a triage scene, with a flaming car, wounded victims and other people representing the movie's main characters walking around in slow motion, looking dazed. Bird York, the singer-songwriter nominated for "In the Deep," performed with a glazed look.


Themost sedate performance of the evening was Dolly Parton. Dressed in a white pantsuit with no background or backup performers, she delivered a compelling performance for her inspirational song about acceptance, "Travelin' Through," from Transamerica.


Though Three 6 Mafia was the first African American rap group to win the honor, they are not the first rappers — Eminem was the groundbreaker for his trophy for "Lose Yourself" from 8 Mile.


But Eminem did not show up to accept his award. Three 6 Mafia did, emphatically.


"That's how you accept an Oscar," joked host Jon Stewart.