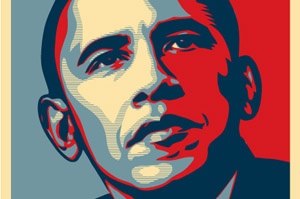 BOSTON (AP) _ The street artist who created the famous "Hope'' poster of President Barack Obama expects to face new vandalism charges relating to the red, white and blue image, but his lawyer said Tuesday that the accusations would cover a period of time when the artist wasn't even in Boston.
The artist, Shepard Fairey, and prosecutors went before a clerk magistrate in Brighton District Court on Tuesday. The hearing was closed to the public, but Fairey's attorney, Jeffrey Wiesner, said police asked the clerk magistrate for permission to charge Fairey with illegally posting his Obama images in Boston's Allston neighborhood between Nov. 25 and Dec. 25.
Fairey, a 38-year-old Los Angeles resident, wasn't even in town during that period, Wiesner said.
"There's no basis for these charges and there's no evidence that links him,'' Wiesner said.
Fairey was arrested last month over two separate vandalism cases in Boston.
One stems from a September 2000 arrest in which police say they saw him pasting a poster on an electrical box. He is accused of failing to appear at his arraignment for that offense. The other pending vandalism case accuses him of tagging property with graffiti in the weeks before he opened an exhibit at Boston's Institute of Contemporary Art on Feb. 6.
Jake Wark, a spokesman for the Suffolk County district attorney's office, said "it is conceivable'' that Fairey could face the new charges related to the Obama poster as early as Wednesday.
In a statement, Fairey said that his art is widely available on the Internet and that he was not involved in the illegal display of his "Hope'' posters in Boston.
"I can only assume that the gratuitous piling on of felony charges by the Boston police is related to my long-standing advocacy as an artist for the idea that public visual space should be filled with more than just commercial advertising,'' Fairey said.
Eddy Chrispin, a Boston police spokesman, said all the pending charges against Fairey are substantiated.
Fairey has been arrested numerous times for drawing on buildings and other private property without permission.
His Obama image has been sold on hundreds of thousands of stickers and posters, and was unveiled at the National Portrait Gallery in Washington before Obama's inauguration.
Fairey based the Obama image on an Associated Press photo. He filed a lawsuit last month against the AP in which he asked a judge to find that his use of the AP photo did not violate copyright law.
The AP has said it is owed credit and compensation for the artist's use of the photo, taken by Mannie Garcia on assignment for the AP at the National Press Club in Washington. The AP has not taken legal action against Fairey.