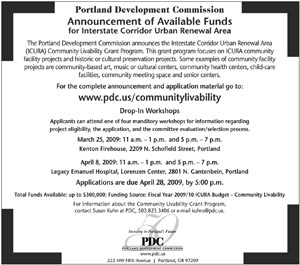 Rep. Chip Shields (D-Portland) this week introduced a bipartisan bill that will provide oversight of how state-chartered banks are spending  money disbursed through the Troubled Assets Relief Program (TARP).
The move comes at the same time another new bill would create a statewide "stimulus czar" to oversee the influx of money expected from President Barack Obama's economic plan.
If passed, Shields' House Bill 2784 would convene a bipartisan group of Oregon state senators and representatives, as well as members of the Oregon Department of Consumer and Business Services and representatives of the financial industry, to provide oversight and evaluate the need for regulation of operations of financial institutions licensed, certified or chartered in this state that receive funds from the TARP program.
Meanwhile, the second, separate accountability legislation, HB 2037, would require private contractors in Oregon to disclose the number of employees and the wages they pay. Supporters say the measure has taken on crucial importance as the federal government has added job creation transparency requirements as a condition of the $6.48 billion in federal funds set aside for Oregon under the recovery plan.
Supporters say the bill would far exceed the contractor accountability provisions currently maintained by any state governments to date, and advocates from the national Coalition for an Accountable Recovery in Washington D.C. testified this week before the Oregon House Business and Labor Committee in support of the bill.
The efforts come amidst renewed calls from the Obama administration for accountability from private contractors on the federal level.
"The people and small businesses I represent have had enough of the bailouts to the financial industry," said Shields.  "There is every reason to try to fix our broken financial system. But we need oversight and banks must be held accountable for how they spend public dollars."
"Oregon is taking an important step to make sure the recovery plan actually creates the jobs it is supposed to create," Nathan Newman, interim executive director of the Progressive States Network, said in a statement.
The group is a national network of legislators and advocates working to help states implement the recovery plan in coordination with CAR.
"Every state needs this data so that they can take money away from contractors who aren't serving the public interest and give it to programs that are," he said. "It's the best way to ensure that the recovery funds go into the hands of working families who have been the most hard-hit by the recession."
Despite the emphasis by President Obama on the need for tracking job creation, the group says no states are systematically requiring contractors to report the number of their employees, the hours they work, or the wages they receive, making it "impossible to determine what amount of recover ydollars are really going to creating jobs."
"Everyone is scrambling to put up these websites, but all the websites in the world won't make a difference if they aren't reporting meaningful data on whether contractors are actually creating quality jobs," Newman said.
The group argues that the lack of meaningful contractor data comes despite explicit requirements from the federal government and overwhelming demand from American public that states collect and report such data.
Under Obama's American Recovery and Reinvestment Act of 2009, states are required to collect contractor data, including the number and quality of jobs they create.
In a January a poll conducted by Lake Research Partners and Topos Partnership, 76 percent of those polled said it was "extremely" or "very important" that state governments maintain websites that track "what companies and government agencies are getting the funds, for what purposes, and the number and quality of jobs being created or saved."
"States are going to have to do this sooner or later," Newman said. "The states that demonstrate effective job creation programs will get additional support from the feds in the future, while those without transparent recovery plans will face an irate public ready to vote them out of office.
"Fortunately, Oregon is leading the way in getting states on track to making the recovery do what it is supposed to do: put people back to work."