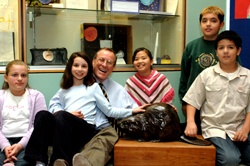 
The site features information about Oregon, a geographical quiz and links to games and other places on the Web where children can learn and have fun.


Included are pages on the governor's favorite hikes in Oregon, places to visit in the state and the governor's own "RaindropStory," which describes the progress of a single raindrop after it falls onto the roof of the State Capitol and eventually joins the waters of the Pacific Ocean.


"I felt it was important to contribute something on our Web site that's specifically for children," the governor said. "Reading is such an important skill, and I want to help young people find enjoyable and educational things to read."


A prominent feature of the site is "Governor Kulongoski's Book Club," which spotlights two books every month — one for kids in kindergarten through the third grade, and another for kids in grades four through six. In addition to reviews of the featured books, the site enables children to submit their reviews and comments.


The "Book Club" offers links to libraries in Oregon, a recommended reading list and a link to "Start Making A Reader Today" (SMART), a nonprofit program that promotes early literacy aimed at children up to grade three. SMART receives support from a partnership that includes the state, Jeld-Wen Windows and Doors, US Bank and the Weyerhaeuser Co. Foundation.