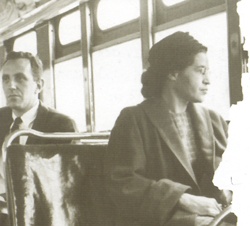 Portland Boulevard may soon bear the name of the late Rosa Parks, who ignited the country's civil rights movement.
The wide boulevard that memorializes the city and is bordered mostly by Portland's older, graceful houses of past generations, could be known as "Rosa Parks Way" as early as May.


City Commissioner Dan Saltzman is spearheading a campaign to rename the street after Parks, who died on Oct. 24. A first reading of a resolution proposing the name change will be heard by the City Council on April 19. The public hearing will be at 6 p.m. in the Interstate Firehouse Cultural Center. A second reading is scheduled on April 26.
Because the street isn't a state highway or otherwise regulated by the state, the change should be fairly simple, he said. The other advantage is that it isn't already named after someone.


Saltzman said he didn't know how long it would take for the name change to be official if the resolution is approved. The cost to change street signs and city maps is being studied, he said. The few businesses along the route, from where it curves into Willamette Boulevard to where it essentially ends at Northeast Durham Street, include small Mom-and-Pop grocery stores and gas stations.


"I think Rosa Parks was a great lady," McKenzie said. "Portland Boulevard crosses Martin Luther King Jr. Boulevard. Both of them made a major impact on the nation's history."


McKenzie said he didn't think it would cost his business too much to change business cards if the street name was changed.


"It's really nice from a business viewpoint to be on Portland Boulevard because people know where it is, but if it's changed to Rosa Parks Way, they will eventually find it," McKenzie added.


He said he hoped that, before the council decided to rename the street, he and others in the area would be contacted.
"I would prefer that the city have a lot of input from people around here, that they pick up the phone and call us. Ninety-nine percent of the people are not going to go to a City Council meeting," McKenzie said.


Several people have suggested the name change, Saltzman said, and he is "simply taking the idea and processing it." However, he added, he believes renaming a main street that runs through North Portland and intersects with Martin Luther King Jr. Boulevard would be a "significant" symbol for the woman who defiantly refused to give up her seat on a Montgomery, Ala. city bus to a White man in 1955.


Her subsequent arrest for violating segregation laws caused Blacks in Montgomery to boycott the buses for nearly 13 months and propelled the young Martin Luther King Jr. into the leadership of the civil rights movement.


"Rosa Parks' courage and exceptional commitment to civil rights struggles have bequeathed for a generation of our Portland citizens what the power of a person's conduct and conviction can achieve," Saltzman said in a memo to his fellow commissioners.


"Her defiance of Jim Crow clarified for people far beyondhernative Montgomery, Ala. the cruelty and humiliation inherent in the laws and culture of discrimination based on race and ethnicity," he added.


"For these reasons, I believe Rosa Parks should be remembered for her courage in the face of adversity and her devotion to the cause of freedom, justice, equality and liberty for all. And renaming Portland Boulevard to Rosa Parks Way is an appropriate honor."


He noted that other cities, including Detroit, Mich. and West Valley, Utah "have already set the stage for this profound honor for Mrs. Parks."


But Saltzman isn't the only one who believes it would be appropriate to rename a street to honor Parks. The Rev. Willie Banks originally sought to change Northeast Sandy Boulevard, from Northeast 122nd Avenue to Martin Luther King Jr. Boulevard, to "Rosa Parks Boulevard." Banks, the minister of New Beginnings Church of God in Christ in Southwest Portland, is building a 63-unit apartment complex at 11814 N.E. Sandy Blvd., which he plans to name Rosa Parks Plaza.


After he heard about Saltzman's efforts to rename Portland Boulevard, however, Banks dropped his Sandy Boulevard idea and supported the commissioner.


Banks said he is happy "as long as we get a street named" after Parks. "I don't want to see one group going against another," he said. "I want to see a team working together.


"I want to see something done for us, for African Americans," Banks added. "I believe some good things will come out of it."


He noted that most people "don't know what she suffered, what kind of backlash she experienced" after her defiant act. But she needs to be remembered for "what she stood for — an African American woman, a strong woman, like all the other beautiful African American women."


While Sandy Boulevard, a primary state highway that crosses several streets and provides access to the Interstate 84 freeway, contains a certain symbolism for Banks, Portland Boulevard also holds a personal memory for him as well. A tree is planted in honor of his late son in the yard of Holy Redeemer School, which faces Portland Boulevard. His son, Willie Banks Jr., was a student at Holy Redeemer before he went on to Central Catholic High School and later to college. He was killed at age 19 by a man who he thought was bothering his girlfriend at a convenience store.
"He was a blessing to me," Banks said.


Both Saltzman and Banks are planning to contact local residents about renaming the street. Saltzman is working with the North/Northeast neighborhood coalitions, and Banks is developing a questionnaire he plans to distribute throughout the neighborhood.


"I think the idea of renaming Portland Boulevard is good because it goes through the stream of the African American community," Banks said. "I'm on board."