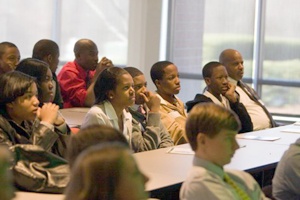 The annual Blacks at Microsoft Minority Student Day on Feb. 13 saw over 150 area high school students learning firsthand the benefits of pursuing an education in technology and the impact it could have on their futures.
In the United States there has been a steady decline in the number of students pursuing engineering and related computer science degrees, especially among minority populations.
Roughly seven out of 100 IT and engineering professionals are African American and the numbers are similar for Latinos.
Minority Student Day, sponsored by Blacks at Microsoft, is an annual event held at several locations across the U.S. with the goal of providing high school students with information about the exciting tools, resources and career opportunities available to them in high technology.
The students had a chance to participate in a variety of activities throughout the day, which included a keynote speech from Robbie Bach, president of Microsoft's Entertainment & Devices Division. Bach stressed the importance of pursuing a degree in math, science and engineering and encouraged the students to think big and focus on their future, not just focus on today.
The event also featured a panel discussion from various Microsoft employees that were in involved in the launch of the recently released Microsoft product, You're in the Movies.  The panelists discussed the role each of them played in the success of this product launch. Students also had a chance to take part in their own product development process, developing ideas for such products as the XBOX and Zune.
"It is Microsoft's hope that we will inspire this new generation of leaders to enter the IT field," said Tony Archibong, Blacks at Microsoft Minority Student Day coordinator. "We are excited about bringing young people to Microsoft to show them the many ways they can control their future through the dynamic world of technology."