Hospital's Chaplain Serves Hungry on Her Time Off 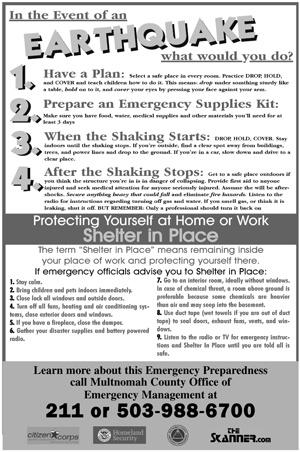 On any given Saturday morning in New Columbia, Vernetta Ollison is doing what she does best – helping people.
"We give out food to the community, any one, any where, any race, doesn't matter," Ollison told The Skanner.
Last year, Ollison and her family gave away food to 1,444 families. She says it all started with a call from God.
"I had such a passion to feed the hungry anyway," she said. "He was telling me I could do more. … I was already supplying food boxes here at Providence to our cancer center."
So nearly two years ago, with the help of a $1,000 grant from Full Gospel Pentecostal, the 60-year-old minister bought a $600 van, loaded it up with food and began handing it out on Fridays at Trenton Terrace in New Columbia.
As the weather turned sour, managers at Trenton Terrace Apartments invited her operation inside. From then on, her food bank has flourished, feeding an average of 50 families every week.
"Sometimes the van is loaded down to the ground," she said. She now hands out food at 10 a.m. Saturdays at 4720 N. Trenton St.
The Oregon Food Bank made her a partner agency and Providence Hospital began supplying her efforts. Ollison works as a chaplain for the maternity, kidney and diabetes wings of the hospital. Providence also purchased a freezer and storage shed for extra food.
As the year continues, she continues to see new faces and hears stories of hardship and loss. She says more Hispanics are experiencing hunger now more than ever.
"I hear personal stories all the time," she said. "One person told me, 'If it hadn't been for you we wouldn't have made it.'"
For Ollison, her quest to ease the pain of hunger and bring joy to people is rooted in experience.
"I know what it's like to live off of 385 dollars a month and food stamps," she said. "I try to show compassion. When you're at that level, people can treat you so cold. It's my ministry to show the love of Christ. It doesn't mean anything if I don't live it."
While working at Providence, she uses that love and compassion to deal with the death that accompanies her job. Even her route to become a chaplain – someone who comforts family members and people who are dying – has been mired in difficulty.

As she was attending A.L. Hardy Academy seminary school, and working at Providence, she twice applied for Clinical Pastoral Education classes at the hospital. She was accepted into one of the five positions on her second try.
"Hot dog in the city I was so excited," she said. "(But) just about at the end of that year, my son died, he had a seizure. … I was devastated. I had some choices to make, could I go forward or stop what I was doing?"
She didn't stop. She continued with another year of classes, work and seminary school, only to get another setback.
"I found out my degree was worthless," she said. "It was an unaccredited institution and it wasn't worth the paper it was printed on."
To get a full-time job as a chaplain, Ollison started over again at Multnomah Seminary at age 57.
"Somehow the grace of God took me through that," she said.
Without these "dark spots," Ollison says she couldn't help people deal with the agony of death.
"I couldn't relate to what these people are experiencing," she says.
She also wouldn't be much comfort if she didn't approach people with an open mind. She regularly encounters those of different faiths, no faith or those who don't want her company because of her skin color.
"I have gone into rooms where as soon as they see you are African American, you can feel it, they say 'no thank you.' But when I approach them, you can see all that melt away. It's just about showing the love of Christ," she says. "I always try to greet them with a smile and leave them with a smile."
"I remember going into a room where the patient was a Wiccan. But I knew I had to respect his spirituality just like I'd want someone to respect mine," she says. "I did that by listening to him and by asking questions. The more he began to explain to me, the more we began to have conversation. But if I'd gone into his room admitting that I knew it all or not wanting to admit I knew nothing, that would have set up some serious walls between the two of us. Now the next time I run across a Wiccan, I'm much better able to understand them."
She's not a Catholic, but she started going to Mass and asking questions.
"But when you set up those barriers, you're not open, you've got to learn different faiths," she said. "Growing up I was Pentecostal and you thought that was it. I had to learn God isn't that small. That he's a great big God and he has even more people than I can even imagine."
If you are in need of food or know someone who is, Minister Vernetta Ollison will be handing out food boxes at 4720 N. Trenton St. She holds religious services on Sundays at 11:30 a.m. at the same location.