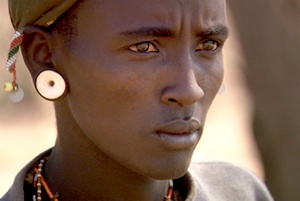 The film "Milking the Rhino" plays at the Portland International Film Festival Friday, Feb. 19 at 6 p.m. at the Regal MetroPlex Theater, 1000 SW Broadway. The film's originator and co-producer, Jeannie Magill, will be part of a post-screening discussion.
The film won the Pan-African Film Festival's Best Documentary Feature award this past weekend and received a Silver Lei award from the Honolulu Film Festival. It was made by the production company Kartemquin Films, which also made the multi-award winning "Hoop Dreams," "The New Americans," and "Stevie."
PBS broadcast of this film (Independent Lens) is slated for April 7, 2009.