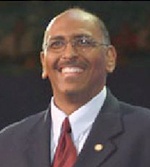 BALTIMORE (NNPA) - Defeating the incumbent party chief and three other challengers after six rounds of balloting, former Maryland Lt. Gov. Michael Steele was elected Friday to chair the Republican National Committee (RNC), becoming the first African-American to lead the GOP.
Steele takes over a beleaguered GOP as Republicans seek to rebound from back-to-back defeats in national elections that gave Democrats control of Congress and the White House.
The Washington Post reported that the decision came after a series of ballots that displayed a level of drama rarely seen in national politics.
With the historic election of President Barack Obama serving as the first Black president in America, the Los Angeles Times reported the move as an interesting play to corral minority voters who will be crucial to a Republican comeback.
Two African Americans campaigned to lead the Republican National Committee.
Steele, the former Maryland lieutenant governor, was the first African American to win statewide office in Maryland. Four years later, he lost a bid for the U.S. Senate to Benjamin Cardin, a Democrat.
The other African American who had hoped to lead the Republican Party was Kenneth Blackwell, the former secretary of state of Ohio. A staunch conservative who believes that the party should stand its ground whether Blacks are attracted to it or not, Blackwell has been serving as vice chair of the RNC's platform committee and was the party's 2006 nominee for governor in Ohio.
Both men ran against several White candidates who included former RNC Chair Mike Duncan; Saul Anuzsis, chair of the Michigan GOP; Katon Dawson, chair of South Carolina Republicans; and Chip Saltsman, a Tennessee party leader who was campaign manager for former Arkansas Gov. Mike Huckabee's presidential bid and who generated controversy when he sent a CD titled ''Barack, the Magic Negro'' as a Christmas present to RNC members.
Blackwell started with 20 votes after the first round of voting, and he had 15 votes after four rounds. He then dropped his bid for RNC chair and gave an impassioned endorsement of Steele.
Steele won 91 votes out of a possible 168 in the sixth round. A simple majority of 85 was needed, but it took six rounds for Steele to win.
On the sixth and final ballot, Steele bested South Carolina Republican Party chairman Katon Dawson, 91 to 77.
Promising to bring the party to "every corner and every group" in the nation and warning obstructionists to ''get ready to get knocked over,'' Steele said the party of Abraham Lincoln is a conservative party and ''we will cede no ground to anyone on principles...It's time for something completely different and we are going to bring it to them,'' Steele said after his victory. ''This is our opportunity. I cannot do this by myself.''
He called his win an opportunity to empower and grow the Republican base.
''It's time for something completely different…We will make sure that we work hard to make sure those principles, those values that have made us the party of Lincoln are part of the issues, are part of the policies, are part of helping set a new direction for this country,'' Steele said. ''We will cede no ground to anyone on principles and on matters that matter to the people of this country. So my first official act as your new chairman is to end this speech right now.''