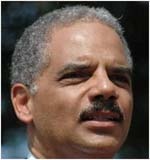 WASHINGTON (NNPA) - Despite earlier efforts by Republicans to hold up his confirmation, Eric Holder met Senate committee approval, approval of the full Senate and was sworn in yesterday.
He becomes the nation's chief law enforcement official and America's first Black attorney general.
Holder, who served as deputy attorney general in the Clinton administration, escaped the GOP lions den after Sen. Arlen Specter (R-Pa.) decided not to withhold his vote for confirmation.
Both Democrats and Republicans have described Holder as experienced and willing to admit his mistakes, as well as tough on crime. He is also opposed to torture.
It had been correctly anticipated that Holder's confirmation would be the toughest of any of Obama's cabinet selections.
Specter said he came to his decision largely because of the "weighty" recommendations of former FBI director Louis Freeh, James Comey, who served as a deputy attorney general for President George H. W. Bush and former Transportation Secretary William Coleman.
Prior to Specter's change of heart, Holder's confirmation had been held up to demand more time to question him about harsh interrogation techniques and Guantanamo trials, as well as issues pertaining to some pardons of President Clinton, including the last-minute pardon of fugitive financier Marc Rich, whose wife was a major Democratic donor.
Senators asked Holder why he backed pardoning Rich and questioned his recommendation to commute the sentences of Puerto Rican nationalists who belonged to a group that carried out murders, robberies and bombings, according to AP. Holder acknowledged his mistake in the Rich case but defended his decision in the case of the nationalists, saying they did not commit the violent acts.