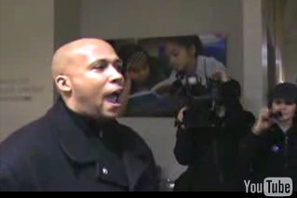 (To watch the entire YouTube video, click on this image.)
During a meeting that nearly descended into a riot, the Seattle School Board last Thursday voted to close five schools and move all or part of eight other programs.
Seattle NAACP President James Bible was forcibly ejected from the meeting by Seattle police, although, news reports said, he was quietly leaning against a wall. When two White officers approached him and demanded that he take a seat or leave, the crowd erupted into a furor and Bible was ejected from the meeting.
The scene was captured by several video cameras and posted on YouTube. A clip of the police scuffle, the outraged response from attendees at the school board meeting, and Bible's spontaneous speech in the lobby outside has been posted on Bible's NAACP blog, http://jbible-naacp.blogspot.com/.
Bible told the crowd that he had planned to simply attend the meeting and listen to the discussion among the board members. However after he was thrown out by police, he had a few things to say about the school board members and their school closure plan.
"They don't care about the African American Academy, they don't care about T.T. Minor, they don't care about poor kids and kids of color," Bible said. "And while we're at it, let's talk about a school superintendent who  right now is explaining a particular situation to all of us in a very compassionate, calm, semi-eloquent manner, while she's talking about we don't have money, she's making $260-plus thousand a year."
Earlier this month NAACP officials indicated they may sue the school district over the impact of the closures.
The 5-2 decision to approve the closure list proposed by Superintendent Maria Goodloe-Johnson prompted boos from the crowd. Several people were ejected by police.
According to Goodloe-Johnson and her supporters on the board, the plan is designed to save $16 million over five years, and would send about 1,800 students to new schools.
Enrollment has been declining in the Seattle School District, which is the largest in Washington with more than 44,000 students and about 100 buildings.
School board members Mary Bass and Harium Martin-Morris attempted to float compromise adjustments to Goodloe-Johnson's closure proposal, but both were outvoted.