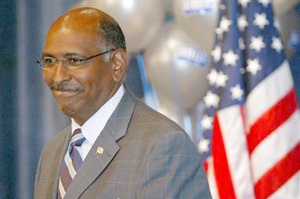 WASHINGTON (AP) _ The Republican Party chose the first Black national chairman in its history Friday, just shy of three months after the nation elected a Democrat as the first African-American president. The choice marked no less than "the dawn of a new party," declared the new GOP chairman, former Maryland Lt. Gov. Michael Steele.
Republicans chose Steele over four other candidates, including former President George W. Bush's hand-picked GOP chief, who bowed out declaring, "Obviously the winds of change are blowing."
Steele takes the helm of a beleaguered Republican Party that is trying to recover after crushing defeats in November's national elections that gave Democrats control of Congress put Barack Obama in the White House.
GOP delegates erupted in cheers and applause when his victory was announced, but it took six ballots to get there. He'll serve a two-year term.
Steele, an attorney, is a conservative, but he was considered the most moderate of the five candidates running.
He was also considered an outsider because he's not a member of the Republican National Committee. But the 168-member RNC clearly signaled it wanted a change after eight years of Bush largely dictating its every move as the party's standard-bearer.
Steele became the first Black candidate elected to statewide office in Maryland in 2002, and he made an unsuccessful Senate run in 2006. The former chairman of the Maryland Republican Party currently serves as chairman of GOPAC, an organization that recruits and trains Republican political candidates, and in that role he has been a frequent presence on the talk show circuit.
He vowed to expand the reach of the party by competing for every group, everywhere.
"We're going to say to friend and foe alike: 'We want you to be a part of us, we want you to with be with us.' And for those who wish to obstruct, get ready to get knocked over," Steele said.
"There is not one inch of ground that we're going to cede to anybody," he added.
"This is the dawn of a new party moving in a new direction with strength and conviction."
His job is to spark a revival for the GOP as it takes on an empowered Democratic Party under the country's first Black president in the next midterm elections and beyond.
He replaces Mike Duncan, a former Inez, Ky., banker who abandoned his re-election bid in the face of dwindling support midway through Friday's voting.
Two others who trailed farther back in the voting eventually followed suit, former Ohio Secretary of State Ken Blackwell and Michigan GOP chairman Saul Anuzis.
In the sixth and final round of voting, Steele went head-to-head with his only remaining opponent, South Carolina GOP chief Katon Dawson. Steele clinched the election with 91 votes; a majority of 85 committee members was needed.
Just eight years after Republicans controlled both the White House and Congress, the GOP finds itself out of power, without a standard-bearer and trying to figure out how to rebound while its foe seems to grow ever stronger.
The Democratic Party boasts a broadened coalition of voters _ including Hispanics and young people _ who swung behind Obama's call for change. At the same time, the slice of voters who call themselves Republican has narrowed. The GOP also has watched as Democrats have dominated both coasts while making inroads into the West and South, leaving Republicans with a shrunken base.
Despite the run of GOP losses, Duncan had argued that he should be re-elected because of his experience; his five challengers called for change and said they represented it.
As he left the race, Duncan thanked Bush and said of his two-year tenure: "It truly has been the highlight of my life."
Another candidate, former Tennessee GOP Chairman Chip Saltsman, withdrew from the race on the eve of voting and with no explanation, saying only in a letter to RNC members, "I have decided to withdraw my candidacy."
Saltsman, who ran former Arkansas Gov. Mike Huckabee's failed presidential campaign last year, saw his bid falter in December after he drew controversy for mailing to committee members a CD that included a song titled "Barack the Magic Negro" by conservative comedian Paul Shanklin and sung to the music of "Puff, the Magic Dragon."