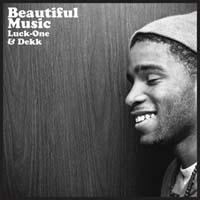 After a nearly six-year hiatus, hip hop artist Luck-One is back. Working with producer Dekk for the first time, the duo's releasing their new EP "Beautiful Music" on Feb. 15.
The album's release comes a day shy of the sixth month anniversary of the hip-hop artist's own release from prison on July 16, 2008. He's been wasting no time since.
"Rap is the only thing I felt I was really, really good at," Luck-One told The Skanner.
And in prison – convicted at 17 under an armed robbery measure 11 charge – there wasn't much hip hop music to find. In Pendleton, most of what was available was country music, which Collins says you actually start appreciating after a while. But the internal creativity wouldn't come in the confines of the Oregon prison system.
"I have to have the music to write," he said.
The 24-year-old was once part of the Seventh Science collective before his career took its hiatus. He describes his latest endeavor as a cross-cultural medium that challenges the status quo. Listening to the beats, Luck-One can be both swift and mellow, not being easily categorized.
Listen online at www.myspace.com/logikdivine or www.myspace.com/dekkmusic. Luck-One will be performing at the Ash Street Saloon as part of the Northwest Breakout Showcase on Thursday, Jan. 29. He will also be performing on at 8 p.m. on Feb. 8 at the Interstate Firehouse Cultural Center. A full list of upcoming shows is available on Luck-One's myspace page.