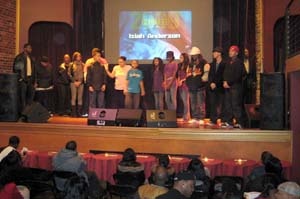 In the midst of an historic time in our country's history, local hip hop, rap and R&B artists from all over the Seattle area gathered last weekend at the Columbia City Theater for the Martin Luther King Jr. County Executive Awards for Excellence in Hip Hop.
The award for Excellence in Hip Hop recognizes and honors innovative performers who are involved in community service and entrepreneurial achievements. Not only do they recognize artists, but they also acknowledge local leaders within the Hip Hop community who have helped to build and sustain a strong ethnic community in the King County area.
Even though the local Hip Hop community is exploding with talented artists and creative minds, only five artists, including Steelo, Kontagious, Silver Shadow D, The EriAm Sisters and Chani, and five community leaders, including 206 Hip Hopumentary Team, Isiah Anderson, Northwest Tap Connection, Jennifer Commodore and Central District Forum for Arts and Ideas, were nominated for this award--making it a distinctive honor worthy of recognition.
Veteran Hip Hop artist Silver Shadow D won the award for Excellence in Hip Hop. As a writer, recording engineer, performing artist and human beatbox, he has exemplified dedication, hard work and creativity. He was inducted into the Experienced Music Project in 2000, and has become a MySpace phenomenon with over 1.4 million views. He has become an inspirational figure for local artists and has never given up on his dreams.
Steelo, a Hip Hop/R&B group formed by two Washington natives, was among the select group of nominees. "When I heard about the nomination, I felt surprised and excited," A.Uno, from Steelo, said. "We were chosen out of hundreds of entries. I feel very honored to be here."
Having opened for well-known performers such as Pitbull and Magic Juan, Steelo has received national airplay for their recent hit single "Make Up My Mind," which they preformed live at the award show. Their hard work, determination, and positive outlook made them good candidates for the Hip Hop excellence award.
Along with Steelo, there were eight other performances by talented local artists. "My music was played on StreetBeat on KUBE 93. [The host] Tony B liked it, and asked me to perform it in the show," Melissa Roork, an up-and-coming R&B artist from Tacoma, said. "I write music and record whenever I can. This is more than my hobby—it's my passion."
Some of KUBE 93's radio personalities, including Eddie Francis, Tony B and DJ Vinnie the Pooh, attended the event to show their support for local artists. The entire event was recorded and streamed live on their website, and can still be viewed on www.kube93.com. KUBE 93 supports local artists via StreatBeat and the Sunday Night Sound Session—where artists can submit their music to be played on their station.
While the event honored and celebrated local artists and their diverse success stories, it also showed appreciation for the man who made the entire journey possible—Martin Luther King Jr. Powerful images and videos of the challenges and triumphs of the Civil Rights era played before the audience in the theater, and re-affirmed how far our country has come in the past 60 years.
It is evident that MLK's dream is still alive today—but now, it has become more than a dream. Along with King, the show also celebrated the inauguration of the first African-American president in our country's history, Barack Obama. Because of this, MLK's dream of freedom, equality and prosperity has finally become a reality.
While artists in the local Hip Hop community have experienced their share of difficult times and dismissals, the inspirational figures of our generation have proven that dreams, no matter how seemingly unattainable, can actually come true.
For more information about Silver Shadow D, visit www.myspace.com/ferrociousakasilvershadowd; for information about Steelo, visit www.myspace.com/steelomusic; for information about Melissa Roork, visit http://www.myspace.com/melissaroork.

Stephanie Birch is a student in the University of Washington Department of Communication News Laboratory.