Students Learn the Science of Basketball 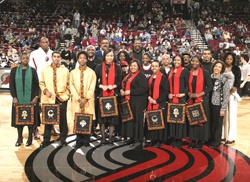 Members of the Bridge Builders' Prospective Gents and Imminent Ladies of Virtue programs, along with members of the community and the Trailblazers organization, are honored at the Rose Garden's center court Feb. 24 during halftime of a Blazers/Celtics game. The ceremony was part of the Blazers' observance of Black History Month. Students from Humboldt Elementary and St. Andrew Nativity Middle schools were also in attendance.

Stars of the human and celestial variety competed for the attention of students visiting the Oregon Museum of Science and Industry's Kendall Planetarium on Feb. 24.


Recognizing an opportunity to educate youngsters about the important roles math and science play in their lives, OMSI President Nancy Stueber and The Skanner Publisher Bernie Foster hatched a plan to bring students from Humbolt ElementaryandSaint Andrew Nativity Middle schools to OMSI.


Jerry Moss, community outreach director for the Portland Trailblazers, presented his entertaining "The Science of Basketball" program, which covers everything from how a basketball's air pressure affects its bounce to the composition of basketball shoes and how the Rose Garden's adjustable ceiling tiles influence sounds and sound levels inside the auditorium.


Ron Barnes, senior vice president of learning, welcomed Bernie Foster and Bobbie Dore Foster, The Skanner's executive editor. They were joined by Cheryl Roberts, director of the African American Alliance for Homeownership; Jamila Williams, Humboldt School principal; and Jeffrey McDougall, Saint Andrew Nativity School principal. Stueber and planetarium Director Jim Todd shared facts about the Milky Way Galaxy and Kendall Planetarium with the visitors.
This was the first trip to OMSI for most of the students, though quite a few had played basketball and were familiar with Trailblazers players.


"Sports is a great way to educatekids,"Moss explained. "My talks incorporate math, journalism and science. When introducing these subjects with a topic about which youngsters are already familiar, it's amazing how quickly and effectively they learn."


Moss then demonstrated how NBA referees use nonverbal communication to signal time-out and call fouls, testing students on how well they remembered this lesson.


"All right, call a personal foul for hacking. Now signal a 20-second time-out. Show how you would signal a technical foul on No. 44," barked Moss. Many of the students provided the correct signals, for which they were rewarded with basketball-related prizes, including actual player shorts and warm-up slacks.


After the planetariumpresentation "Passport to the Universe" — as well as Moss's insights into some of the Trailblazers players — the young visitors were treated to dinner and some free time at OMSI, and an NBA gamebetween Portland and the Boston Celtics at the Rose Garden.


"While at the game, look up at the ceiling and notice the big white tiles. They can be arranged in a variety of ways to highlight certain sounds," Moss told the students. "Tonight they'll be positioned to increase audience noise levels, but for symphony, hip-hop, rock or jazz concerts they can be turned in different ways to achieve specific acoustic effects."
An informal poll among the students revealed Trailblazer player Darius Miles to be a popular favorite, though practically every Trailblazer was mentioned as somebody's favorite — including a couple of players who recently were traded.
Near the end of Moss's presentation,astudent asked, "Do you really know Darius Miles?"


Moss replied, "Sure. I spent most of the day with him only yesterday."


"Could I have his phone number?" responded the young visitor.