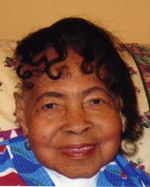 Mattie A. Dyer died on Dec. 14, 2008. She was 92.
Mattie was born on April 17, 1916 in Arcola, Miss. The seventh child of 12 born to the union of the late Eugene (Bud) Cusic and Mary Ann Cusic.
Mattie's early childhood years were spent in Mississippi, where she attended school. At an early age she gave her life to the Lord, and was a member of Mt. Arrot Baptist Church in Trelake, Miss.
In 1941 she and Lewis Dyer Jr. were joined in matrimony. Shortly thereafter they moved to Portland. She joined Mt. Olivet Baptist Church where she actively served on various circles and ministries faithfully for some 50 plus years.
She worked as a domestic engineer, caregiver to all in need and most of all nanny for all the grandkids. Ma's hotel was always open.
She is preceded in death by her husband Lewis and son Norman Dyer.
She is survived by sisters: "Ma Emma," 105 years old of Detroit, Mich. and Claudia Collins of Kansas City, Mo.; daughters: Barbara Thompson, Anita Jenkins, Jeanette Richardson and Genora Dyer-Dishman all of Portland; grandchildren: Alphonso Jenkins, Byron "KD" Dyer, LaNae Dyer and Alisha Richardson;  great grandchildren: Vanasha Williams, Xzavyer Jenkins, Kalaysha Jenkins, Robert Richardson III and Geleah Andrea; and a host of nieces, nephews and cousins.
A service was held on Dec. 29, 2008.
Arrangements Entrusted to Cox & Cox Funeral Chapel.