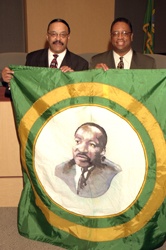 Eddie Rye, left, and King County, WA Councilor Larry Gossett, pictured here in 2001, display a flag bearing the new King County logo — designed by Mark Anthony Smith — depicting the image of Martin Luther King Jr. Rye and Gossett led the drive to have King's image adopted by the county, home of the city of Seattle. Rye was also instrumental in the effort to have the name of Portland's Union Avenue changed to Martin Luther King Jr. Boulevard.

Seattle—An overflow crowd of more than 275 people filled the County Council chambers and lobbies Monday as the Metropolitan King county council approved an ordinance to change the county's official logo.


The crown that has been the logo of King County for 38 years will be replaced with an image of the Rev. Martin Luther King Jr., the county's namesake.


"King County is the first government in the nation to adopt the image of our foremost civil rights leader as its official logo. This is truly a day to celebrate," said Councilor Larry Gossett, prime sponsor of the ordinance. "This change gives respect and visibility to the fact that our countyis named in honor of Dr. King.


"The image of Dr. King will be a powerful and influential symbol for the many thousands of visitors to our region now and in the future," Gossett added. "They will immediately see that our logo reflects a government committed to diversity, peaceful resolutions to differences, racial and religious tolerance and social and economic justice for all of its residents."


When created in 1852, King County was named after U.S. Vice President and slaveowner William Rufus DeVane King. In 1986 the county council passed a motion changing the county's eponym to that of the Rev. King. That motion did not have the force of law, however, until the state Legislature approved and Gov. Gregoire in April 2005 signed Engrossed Senate Bill 5332 changing the county's namesake.


Gossett met in January with Martin Luther King III, the eldest son of Martin Luther King Jr., regarding the logo proposal and was told that the King family "certainly sees it as a great honor," and has historically granted authority to schools, charities, nonprofits and government entities to use the King's works and image without paying a royalty.


"With today's action, the citizens of King County will at long last have a logo worthy of our great community," said council Chair Larry Phillips. "The image of Dr. King atop county letterhead, in county buildings, and on county vehicles will serve as a daily reminder of the values he inspired in all of us as Americans: freedom, equality, peace, and opportunity.


"His leadership, and the movement he ignited, allowed cultural and racial diversity to thrive in King County and throughout our nation. His legacy reminds us of the bedrock values of our democracy, a far cry from the imperial image of our current logo — a crown symbolizing monarchy and royalty," Phillips said.


King County's former symbol, a crown inside two circles, was the county's fourth official logo since its creation by the territorial legislature in 1852. The crown logo was adopted as part of a public contest that followed the creation in 1968 of the county's charter form of government. That logo later went through two minor revisions.


The ordinance directs the county executive to transmit for council approval a new logo design in the likeness of King, along with graphic standards, guidelines and procedures for its use. Existing stocksofletterhead, envelopes and business cards will be depleted before new ones are ordered. For such durable items as vehicles and signage, the measure calls for replacement to be phased in during the ordinary course of business.


"In most cases, items bearing King County's logo will be replaced as they wear out, which means the cost of transitioning to this priceless symbol will be marginal," Phillips said.


The ordinance prohibits use of the new logo for purposes of fund-raising or solicitation of donations, other than to the county and its Employee Charitable Campaign, or to advertise or promote commercial events or merchandise, goods or services. The ordinance also directs the executive to continue to seek feedback from the King Center and King estate on what would be required if King County ever desired to use its logo for commercial or for-profit purposes.


"It is an honor to associate King County with the legacy of Dr. Martin Luther King Jr.," said Councilor Dow Constantine. "By making Dr. King's image the symbol of King County, we provide a daily reminder of his challenge to us: that we as a nation continue to strive to live up to our ideals."