By The Skanner News
Published: 22 February 2006 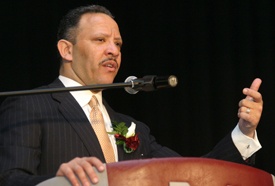 HOUSTON--Black leaders who gathered Saturday to discuss issues affecting the community said Hurricane Katrina is forcing a much-needed dialogue on poverty in the United States.

"The storm came. Lives were washed away. Ancient pains resurfaced. Now it is time for a sea of change," said broadcaster and author Tavis Smiley, who organized Saturday's State of the Black Union dialogue in Houston. Marc H. Morial, President of the National Urban League and a former New Orleans mayor, said many along the Gulf Coast lost not only their material possessions, but their lifelong community ties.

"The government of this nation has the responsibility to make people whole," Morial said. "We all have to be advocates, because Katrina is not just about New Orleans and the Gulf Coast. Katrina exposed poverty and it also exposed neglect."

Morial was among dozens of leaders who spoke on three discussion panels at the seventh annual State of the Black Union.

Thousands gathered in a sanctuary at a Houston church for the nationally televised discussion.

Tens of thousands of Katrina evacuees remain in Houston -- uncertain if they will ever get to return to the city they once called home.

Hurricane survivor Rochelle Smith, 39, said she felt like the government "didn't care about Black America" as she went from state to state, eventually ending up in Houston.

"It's hard emotionally because this is not home," she said. "It's like being in a foreign land."

Julianne Malveaux, an economist and author, said those who survived Katrina and the problems they continue to face must not drop off the radar. There need to be efforts, she said, to get those who were forced to leave, back home.

"What are Black folks doing in Utah?" she asked. "Nobody is trying to make them whole.

Part of making them whole is allowing them to return." Morial said some have approached him surprised about the poverty that plagued New Orleans.

He said he responds by asking, "Where are you from?"

"You have got a Ninth Ward in your hometown too. Don't think there isn't poverty and economic disparities in every single city," he said.

Many Blacks are just a generation removed from poverty, Morial said, and he called those who turn their backs on those who are less advantaged "sellouts."

Every Black American should do everything possible to help hurricane survivors and themselves get into a better economic situation, he said. Morial said the same resources that are going toward rebuilding Baghdad should be committed to rebuilding New Orleans -- an "American city."

"We want the Gulf Coast to be treated like New York City was treated after 9-11," he said. "This has got to be an opportunity in this nation for us to begin a new conversation about poverty."