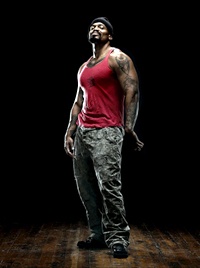 Flexing his solo strength for the first time, rapper/poet/activist Mic Crenshaw is showing that he's more than just a piece of the puzzle. After nearly 15 years of recording and playing with a number of different acts in Portland – including Hungry Mob, Cleveland Steamers and Suckapunch – Crenshaw took the last year to produce his first solo project, "Thinking Out Loud."
A testament to what Crenshaw stands for – "Thinking" is not an album that reverts to cheap tricks or fake street songs. It's deadly serious in the subject matters he encounters and challenges – government corruption, failed relationships, personal destruction, oppression, Attica.
"This record is more of a personal statement of myself as an artist," he told The Skanner.
Several tracks on the album come from Crenshaw's side projects, and he says the album couldn't have come together without the help of other Portland music industry types that he's worked and performed with over the last decade. And it also couldn't have come together without the political passions that fuel much of Crenshaw's projects.
"In my music, I own, I'm accountable for all aspects of my personality," he said. "What I write about politically keeps me up at night and gets me out of bed in the morning. My emotions are connected to my political existence. That said, I'm just using the language as a tool — it doesn't mean I'm righteous."
Far from it, Crenshaw doesn't want to use the microphone as a bully pulpit, and he shies away from being given the label of an activist or socially conscious rapper. Making no compromises with his music, he doesn't hesitate to spell out problems in a way that masks any form of exploitation. Take "Follow your Instincts," an anthem about his time spent in Minneapolis fighting racist skinhead gangs. 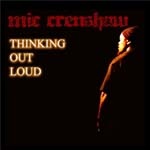 "This is more than an anthem on an intense beat, How many homies you got that fought klansmen in the street? I'm the grandson of a chief and history repeats, As I carry on traditions generations deep, Channel my aggression into challenging oppression, Knowledge is a weapon both powerful and deadly …"
Crenshaw's business partner, Morgan Delaney, says it can be hard to know when the art ends and social activism ends. Delaney and Crenshaw say it is melded together – one could not necessarily exist without the other. The music is also what fuels Crenshaw's nonmusical side projects.
In 2007, Crenshaw started the nonprofit Global Family organization. He originally traveled to Rwanda for a cultural exchange. Through the friendships he started there, he learned about the extreme poverty experienced by native peoples in Burundi, one of Africa's poorest and smallest countries. The project raised enough money last year to supply computers – through a Free Geek grant – and money for a computer lab.


Delaney and Crenshaw are also helping USA La Familia – a hip hop group with many members from Jefferson High School – raise money for a compact disc duplicating machine. Many of La Familia's members are ex-students of Delaney's. They've raised a bit over $1000 of the $1,600 needed so the young artists can have a tangible way of putting together mixtapes and mass producing them. Just like the MCs from hip hop's early days, Crenshaw wants to see the self reliance that embodies many of Portland's indy rappers to continue on with the next generation. The group will also be able to provide the service to other students and community members at affordable prices.
"It's showing them that someone's not going to come along with the golden ticket," Delaney said.
Crenshaw's time in Africa has solidified his belief in tangible change. Ever since he went on an American Friends Service Committee-funded trip in 2004, Crenshaw has made a lifelong commitment to foment positive change in Africa.
"The world got a lot bigger," he said. "The options and the possibilities and the potential about how the world could be — I started seeing that more physically. I've really been reactionary and response based on oppression and economic injustices and racism, all my life. Something happened there that was more based on proactive potential – this is what we can do, this is how it can be …"
The goal of Global Family over the next few years will be to ensure the Burundi computer lab stays up and running. Rent alone costs $395, not counting staffing and other expenses. Crenshaw is unsure of when he will be able to return.
With the attention he's putting on making "Thinking Out Loud" a national success, Crenshaw and Delaney will have to juggle all their commitments. But given Crenshaw's history it isn't a matter of if he gets noticed by the big guns of the music industry. It's when.