'Color Purple' to Open at the Keller Auditorium 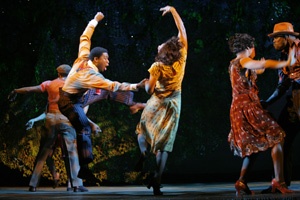 Tickets are available now for the first North American touring production of "The Color Purple," coming to the Keller Auditorium Dec. 30 – Jan. 4.
The show features stars of the Broadway production, Jeannette Bayardelle, Felicia P. Fields and Angela Robinson, along with "American Idol" alum LaToya London.
Jeannette Bayardelle comes to the tour directly from the Broadway production as the lead character Celie.  Jeannette released her debut CD "Praise Report" in 2005, and has toured in productions of "Big River," "Rent" and "Sister Act."
She joins her Broadway cast-mate Felicia P. Fields, who originated the role of Sofia, for which she received a Tony Award nomination. Fields has received numerous awards and nominations for her work on and Off-Broadway.
Also joining the tour direct from the Broadway production is Angela Robinson, who will play the role of Shug Avery.  Robinson has appeared in several other Broadway productions including "Wonderful Town" and "Bells Are Ringing."
Celie's sister Nettie will be played by LaToya London, who was named the early front runner to win season three of American Idol by Simon Cowell and Elton John. On air she joined the ranks of the aptly named "Three Divas," along side Jennifer Hudson and Fantasia (who played Celie in the Broadway production).
Rufus Bonds, Jr., who recently won the L.A. Weekly nomination of "best ensemble cast member" for his work in the Los Angeles premier of "Because They Have No Words," directed by Emilie Beck, will play Mister. Rufus also performed the role of "Mufasa" in Julie Taymor's Broadway production of "The Lion King."
Also starring in the North American Tour are Stu James as Harpo, and Stephanie St. James as Squeak.  Ensemble members are: Lynette DuPree, Kimberly Ann Harris and Virginia Ann Woodruff as the Church Ladies, Carol Dennis as the Church Soloist, and Adam Wade as Ol' Mister.  Rounding out the cast are Brian Harlan Brooks, LaTrisa Coleman, Darius Crenshaw, Tiffany Daniels, Quentin Earl Darrington, Lesly Terrell Donald, Anika Ellis, Doug Eskew, André Garner, Rhett George, Phyre Hawkins, Dameka Hayes, LaTonya Holmes, Jenna Ford Jackson, Grasan Kingsberry, Sumayah McRae, Horace V. Rogers and Kristopher Thompson-Bolden.
Nominated for eleven Tony Awards, including Best Musical, "The Color Purple" opened on Dec. 1, 2005 at the Broadway Theatre where it ran for over two record breaking years.
It is based on the classic Pulitzer Prize-winning novel by Alice Walker and the moving film by Steven Spielberg. It is the unforgettable and inspiring story of a woman named Celie, who finds the strength to triumph over adversity, and discover her unique voice in the world. With a joyous Grammy-nominated score featuring gospel, jazz, pop and the blues, The Color Purple," is about hope and the healing power of love.
The first North American Tour is produced by Oprah Winfrey, Scott Sanders, Roy Furman, Quincy Jones, and others.
Tickets are available via telephone by calling Ticketmaster at 503-790-ARTS, days, evenings, and weekends; or by calling the Portland Opera Box Office at 503-241-1802 or toll free at 866-739-6737.
Groups of 20 or more save up to 10 percent by calling Group Sales at 503-295-3509, or e-mail groups@portlandopera.org.