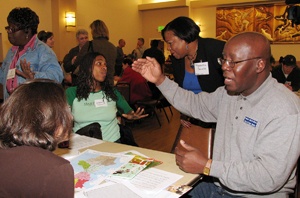 Robin Cabaniss and Akeena Taylor, parents of T.T. Minor Elementary School students talk with Seattle School Board member Harium Martin-Morris at a community workshop on the controversial school closure recommendations Dec. 6 at the Filipino Community Center.  T.T. Minor is one of six buildings recommended for closure, in addition to the African American Academy. The community has several more opportunities for input before the School Board's final vote on Jan. 29.

The Seattle School District announced formal recommendations last month to close seven school buildings and relocate or discontinue 14 school programs, they say, as a way to strengthen its financial standing and maximize its school's capacity.
The 20-year-old African American Academy is on the block, as is Nova Alternative High School – and officials are gearing up for a struggle.
The district is holding public meetings this month before it makes a final decision.
"These meetings are part of a state mandate process," said David Tucker, spokesman for the Seattle School District. "It is part of our community outreach to provide an opportunity to give feedback and testimony." For more information go to www.seattleschools.org/area/capacity.
Public hearings will take place at seven of the schools recommended for closure. Dec. 15, they will be held at TT Minor Elementary, Pinehurst and Van Asselt. On Dec. 16, public hearings will take place at Genesee Hill, Mann and Old Hay.
The final public hearing will take place on Dec. 18 at Lowell Elementary.
The hearings are part of a process culminating in a final school board vote on Jan. 29.
"Of course I am disappointed as are all schools and communities," said African American Academy Principal Christopher Carter. "Closing any school or program is devastating to a school community."
Carter said the school district uses five criteria to determine which schools or programs are closed or moved. They include: the capacity of the area, proximity to other schools, the building condition, cost per pupil and academic performance.
However, by closing the community-centered African American Academy – which was started as a means of eradicating the achievement gap — Carter said the district would lose a key resource providing full-day kindergarten, focused academics as well as family support services.
"There is not another program that I know of that is uniquely focused on meeting the vast social and academic needs of our scholars," said Carter.
As the principal of the African American Academy, he does not believe that the discontinuation of his program and others in the area would have a positive effect on the students. He said the recent WASL tests showed a gain in reading scores for grades 3-6 and a gain of 40 percent on the average writing score for 7th grade.
"It is unsettling that it seems as though African American students in high poverty schools are being disproportionally impacted," said Carter.
District Superintendent Maria Goodloe-Johnson says the recommendations were made in order to strengthen both the district's financial health as well as the academic programs it provides.
On Dec. 3, the superintendent proposed the idea of merging Cleveland and Rainer Beach High School. Tucker said this was only a possible recommendation at this point and the district is determining its viability of that merger.
With school closures and mergers, the relocation of students and parents into new schools which best fits their needs is a big concern.
"It's very important for students to get the right placement," said Seattle Council PTSA President Sharon Johnson. "For this round [of school closures], student assignment is a major issue."
The Seattle Council PTSA is working with the local school chapters to help facilitate and organize to meet their needs. Johnson said the organization does not have an official position on the school closures, but acknowledge it is "a very difficult and upsetting time."
In response to this concern, the district recently announced that it is moving back its open enrollment dates in anticipation of the school board's final vote. The new dates are March 2-31.  Johnson says that with certain schools being moved, students could be have to travel further or look at changing schools.
Tucker said that while many of the affected schools are located in the Central District, Rainier Valley or West Seattle, the school district is not only focusing on these areas.
"In these recommendations we are looked at the whole school district," said Tucker.
He said the Summit Academy was an example of one school from North Seattle that is being recommended to move into Rainier Beach High School. He said the reason for many of school closures and relocations occurring in south Seattle is due to the extra space for students in those schools.
"There is capacity at Rainier Beach High School," said Tucker. "Rainier Beach has a new performing arts center and both schools have a strong focus on the arts, so it is beneficial to both."
However, some school leaders see the latest round of school closures as being unequal to those with greater need.
"From a historical perspective it seems as though we are following an all too familiar path of displacing the children with the highest needs into other schools," said Carter. "I struggle with this philosophy because it does not fundamentally get at the solution of addressing the needs of our students and families."
For more information on the public hearing schedule and list of schools affected, visit www.seattleschools.org