The Blackwebdiva Grows Her Business 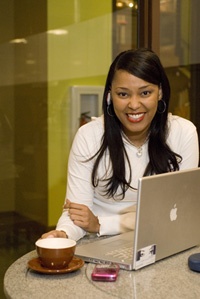 One day, web designer Kimberley Buckley decided she should stop giving away her services to friends and acquaintances.
So despite the fact that she had a full-time job at Nike, she drew up a business plan, styled a sophisticated logo and rolled it all into a sharp-looking website, www.BlackWebDiva.com.
"It's basically, me myself doing web design, graphic design, video editing, kind of thing," she says. "So about five years ago I decided to go ahead and get together as a web company, and make it more official, make it less of a doing favors kind of thing, looking at the bulk of work I was doing and then comparing it to what I knew people were charging for that kind of work."
Now her clients include the legendary Olympic athlete Tommie Smith, the Urban League of Portland, and Nike – where she still works full time.
Buckley says it's worth it to put in the extra work, because as a recently-divorced mother of four talented teenagers, setting a good example is a priority.
"My kids are very active in sports," she says. "At the same time I've passed on to them everything I know about website design and development."
Coming from a community-focused family in Edna, Texas, where her mother works extensively in HIV education and research, Buckley says she seeks balance for her three teenaged sons, Carrington, Jayce, and Kei-Jian, who attend Century High School in Hillsboro, and her daughter Darryl, at Brown Middle School.
Buckley's vision is clear in her website work, particularly in the site she built and has run for Smith for the past 10 years. Smith, who placed first in the 200-meter dash at the 1968 Olympic Games in Mexico City, caused a sensation when he and teammate John Carlos raised black-gloved fists and lowered their heads in a salute to the Black Power movement.
His website, www.tommiesmith.com, offers videos, testimonies and information on Smith's 2007 book, "Silent Gesture: The Autobiography of Tommie Smith."
Buckley says her professional goal is to do well by doing good.
"So I think that if there were just a combination of it being a business as well as any way to work in the community involvement, giving back side of things – in terms of the future, I want the company to get bigger but also increase the opportunity to give back."
Buckley first started teaching herself about web design in 1993, when she was hired by a company called the Internet Store.
"It was literally a storefront that people would come into to find out what the Internet was," she says. Over the years, as she worked a few jobs in Houston and then moved across the country to work on Nike's internal communications – its intranet system – Buckley has benefited from some formal computer training.
"But for the most part, especially in the very beginning, it was just a matter of looking at it and then kind of looking under the hood to see how things were built, and kind of going from there," she says. "And I think that's pretty much what everyone was doing back in the early 90s, just kind of 'how did they build that?' So then you'd add that to your toolbelt."
These days her toolbelt is full of tech talents. In addition to working as a senior accounts manager for Nike in Beaverton, Buckley also contracts separately with the corporation in designing sports-related memorabilia.
When athletes make public appearances promoting Nike equipment at area locations, Buckley puts together souvenir cards with stats and photographs that the athletes can autograph and give away to fans.
Her collector edition cards include commemorations for women's basketball stars Lisa Leslie, Tamika Catchings and Dawn Staley.
Buckley says she hopes someday BlackWebDiva becomes more of a family business, with her children working side by side with her.
She also sees possible future partnerships with some of her co-workers at Nike.
"I think today it's a sole proprietorship, but the hope is that going forward, it becomes a real company, something that's family oriented," she says.
"But then in terms of me and my own company, I actually have a vision board, and right in the middle of that board is a big sign that says, 'BlackWebDiva.com, featured on the Oprah Winfrey Show.'"