By The Skanner News
Published: 03 December 2008 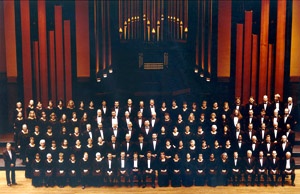 On Tuesday, Dec. 9, at 7:30 p.m., audiences are invited to join Seattle Symphony Chorale in a Holiday Sing-Along in the S. Mark Taper Foundation Auditorium in Benaroya Hall.
Seattle Symphony Associate Conductor for Choral Activities Joseph Crnko will lead the Chorale and audience members as Resident Organist Joseph Adam provides accompaniment on the Watjen Concert Organ.
From "Angels We Have Heard on High" to "Joy to the World," audience members can celebrate the best of holiday music by singing along. The Seattle Symphony Chorale will also perform solo selections and Joseph Adam will perform solo works. Lyrics will be provided for all sing-along selections.
Joseph Crnko joined Seattle Symphony as the Associate Conductor for Choral Activities in September 2007. He is in his 25th year as music director of the Northwest Choirs, the Northwest's premier youth choral organization, which includes both the Northwest Boychoir and Vocalpoint! Seattle.
In addition to his work with the Northwest Choirs, Crnko regularly conducts professional orchestral and choral recording sessions for movie and video game soundtracks, including those for the films Millions, O, Boondock Saints and The Celestine Prophecy, and video games HALO, Medal of Honor and The Age of Mythology.
Crnko served as music director for Civic Light Opera in Seattle and for productions with Alaska Light Opera Theatre, Evergreen Theatre Conservatory, Seattle Children's Theatre and the Professional Actors Training Program at the University of Washington.
The Seattle Symphony Chorale is the official chorus of Seattle Symphony and was founded as the Seattle Chorale in 1953. The Chorale began its formal affiliation as the Symphony's official chorus in 1976 and now consists of about 150 members who volunteer more than 33,000 hours each year. The singers are chosen by audition and perform throughout the season with the Seattle Symphony. The Chorale also produces an annual series of "Summer Sings" choral readings.
For more information on tickets call the Seattle Symphony Ticket Office at 206-215-4747 or toll-free at (866) 833-4747, or visit www.seattlesymphony.org.