Oregon Action to Hold a 'Know Your Rights' Workshop

Do you know what rights you have? Ron Williams' strategy will target those on the receiving end of police use of force, as well as the elected leaders in charge of setting bureau policy. Instead of relying on the police to change tactics, he wants to help empower people to know their constitutional rights.
Oregon Action will be holding the first constitutional rights training session for community members on Dec. 13 from 10 a.m. to 2:30 p.m. at 700 N. Killingsworth St. For more information call 503-282-6588. Similar trainings are held by other rights groups throughout the year, most notably by Portland Copwatch, which just finished a series of three classes held in November.
Williams wants people – especially young people – to know that they have inherent rights when being stopped, questioned and searched by police. The event will contain education about what you can and cannot do during a police interaction, role-playing scenarios and how to report complaints or commendations after the incident. While Williams wants to educate people about their rights, he also wants to make sure interactions with police are less hostile. He says he hears too many stories about youth who end up in the criminal justice system when they react badly to an officer's request after a simple "community policing" interaction.
"Kids don't have the same maturity to sort things out while it's happening," he said. "But the kid knows intrinsically that something's wrong."
Another issue for Williams is the use of "consent" searches – a random search that is conducted when the officer does not have probable cause and the citizen agrees to it – thereby waiving a citizen's Fourth Amendment rights. By definition, if an officer asks to search, they do not have enough evidence to obtain a search warrant. Many studies have indicated that citizens do not realize they have a choice to say no.
"If you haven't done anything wrong, you should say, 'No officer, I don't want you to search our bags,'" Williams said.
Dan Handelman, of Portland Copwatch, says knowing your constitutional rights are key, but that change from the officer's perspective is desperately needed. He believes many officers treat people with suspicion and rudeness if they exert their right not to be searched or give their name when they are not considered suspects of a crime.
"By educating the public, we can help foment that institutional change," he said.
The other part of Oregon Action's strategy is to meet with city officials. There have already been preliminary talks with Dan Saltzman's office. Saltzman will be the new police commissioner under the Sam Adams mayoral administration. Incoming commissioner Amanda Fritz made a commitment to meet with the Oregon Action campaign, although Williams said he is still unsure about how the new administration will treat the issue of racial profiling. 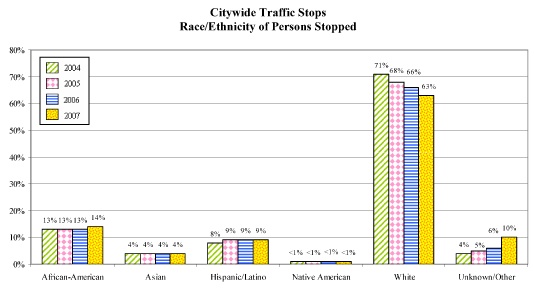 In 2004, 13 percent of those stopped were Black; in 2007, that number increased to 14 percent. Total stops also increased for Latinos by one percentage point, and "unknown" race stops increased from 4 percent of stops to 10. Stops of Whites decreased from 71 to 63 percent over that same period. Searches are more common – 8 percent of Blacks stopped are searched; only 4 percent of Whites stopped are searched. It is unknown if police are searching based on a consent or probable cause. Blacks are less likely to be found with "illegal items" during searches – only 29 percent compared with 33 percent of Whites. (Images from the 2007 Portland Police Traffic Stop Data, released in July 2008). 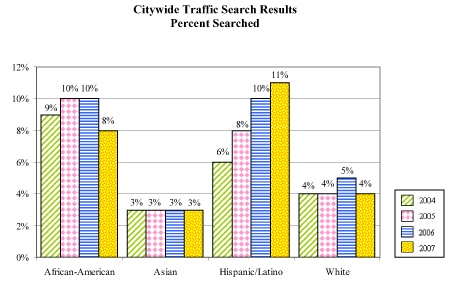 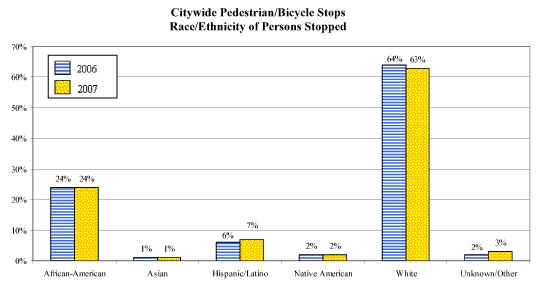