In May of 2006, Oregon Action held the first of five listening sessions on the practice of racial profiling among Portland police.
More than two years, dozens of public meetings and thousands of traffic stops later, some say the problem has not gone away.
And as the Racial Profiling Committee is dissolved into the newly formed city Human Rights Commission, it remains to be seen if the efforts will produce tangible results.
Leading some of this criticism is Ron Williams, the organizer for Oregon Action's multiphase Community Campaign to End Racial Profiling. He says motorists are still being stopped for Driving While Black, despite a commitment by the city to eliminate the illegal practice that many in the police bureau still deny occurs.
"We're specifically looking at young people," he told The Skanner. "African American fathers, community leaders and pastors are really concerned about the younger generation interacting with police."
Oregon Action is holding its first constitutional rights training session on Dec. 13, offering information on what to do during a police stop and basics on how law enforcement effects the community (See "Oregon Action to Hold a 'Know Your Rights' Workshop" story).

Same Problem, Different Day
In November 2000, then Police Chief Mark Kroeker convened the Blue Ribbon Panel on Racial Profiling. The panel consisted of community leaders, police and citizens who made a variety of recommendations — many of which lead directly into the kind of support future commissions and committees on racial profiling need to act on the problem, including data collection, training, and minority recruitment.
They also agreed upon a definition for racial profiling: "The use of race as the sole basis for justifying traffic stops or other police action."
However in 2006, the problem remained, and since 2007, Mayor Tom Potter has been holding his own Racial Profiling Committee by the goal of creating a new plan to combat the issue by October.
This fall, city officials announced a restructuring of their efforts, dissolving the committee that specifically examined race-based police stops and folding it into the Human Rights Commission and the Portland Police Bureau as three standing committees. 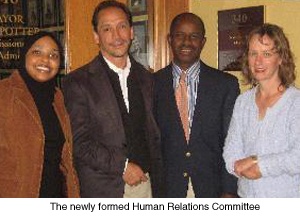 The Human Rights Commission will oversee the Police/Community Relations Committee, and the Police Bureau will oversee both the Hit Rate Work Group — looking at the way searches are conducted – and the Professionalism Standards Workgroup – looking at the way police conduct themselves during interactions with the public.
Despite monthly meetings, racial profiling seems to remain the problem it was when Potter formed his committee. A Portland Police report released in July indicates that African Americans are being stopped at an even greater percentage than they were several years ago.
Maria Lisa Johnson, the director of the newly formed Human Relations Commission and member of the committee, says the committee has brought the issue into the public sphere and created groundwork for the future.
"(But) the data hasn't changed," she said.

Bureaucratic Wrangling
Williams thinks the issue of racial profiling will be buried under bureaucratic wrangling; the issue forgotten under a committee with concerns other than racial profiling. The former education advocate is also still waiting for a concrete anti-racial profiling plan from Police Chief Rosie Sizer's office – a plan that was scheduled to be released mid-October.
"We have real questions about why it's been two years with no written plan," he said. "Racial profiling is a current and ongoing problem that still needs to be addressed."
Sizer's office responded that the plan will be released in draft form in January. Two community meetings to address the racial profiling action plan have not yet been scheduled. Many aspects of the Human Rights Commission are still being crafted. Johnson said the commission has yet to decide how often the Police/Community Relations Committee will meet, with the first meeting likely occurring in February. Two other standing committees under the commission have not yet been formed and their purpose is still being debated.

Johnson said some members of the mayor's Racial Profiling Committee are being asked to serve on the new boards. Dan Handelman of Portland CopWatch says he has not yet been asked to join any of the committees, but says he will only join the work groups if they are to be held publicly. He also says if members of all three groups are not intimately involved with the others, they won't be effective in combating tensions with the community.
Johnson says there needs to be measurable results against race-based stops, although she admits the problem has no easy fix.
Johnson would like to see a community policing model similar to one used when she headed the Latino Network. Officers and community people were invited into a person's home and everyone had a dialogue about their experiences and expectations.
At first, she said the officers thought it was going to be another experience similar to the Listening Sessions, where community members mainly hammered police with complaints. The living room sessions, on the other hand, were received positively by police and have helped form relationships where none had existed before.
"It's complex, it will take time," she said. "But there are people deeply committed to changing policies and practices that have disparate impacts on communities."