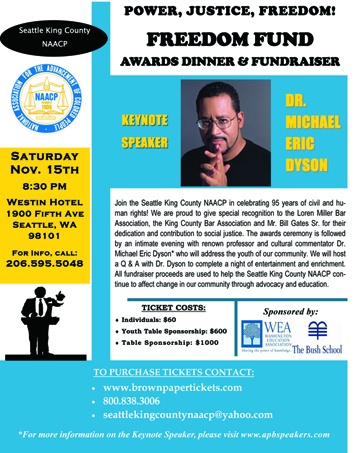 The Bush School, in partnership with the NAACP and Washington Education Association, brings author, radio show host, and political commentator Dr. Michael Eric Dyson to Seattle as the keynote speaker for the Seattle King County NAACP's Ninety-Fifth Year Celebration: Power, Justice, Freedom!
Free and open to the public, the celebration takes place on Saturday, Nov. 15 at 5:30 p.m. at Mount Zion Baptist Church, 1634 19th Ave.
A gala Freedom Fund dinner reception follows at 8:30 p.m. at the Westin Hotel in downtown Seattle.
"We haven't had a keynote speaker quite as well-known and dynamic as Michael Eric Dyson," said Freedom Fund reception planner Betty Dovinh. "So it's something new, refreshing, we're reaching out to appeal to a younger crowd, a multicultural, multiethnic group of people."
Dyson is considered one of the most influential African Americans of our time. His books tackle some of the toughest and most controversial issues of our day, including Martin Luther King, Jr.'s legacy, racial conflict and Black identity, and the political fallout from Hurricane Katrina.
He is the host of a syndicated radio show, and is a professor at Georgetown University where he teaches theology, English, and African American Studies.
"We really want to emphasize that the NAACP is moving in a direction to where we are really hoping to empower the youth," Dovinh said. "We've been doing several things that emphasize the importance of education in our community, community building, we've done a lot of police accountability hearings.
"We've started a lot of new programs, and we want to make them lasting programs, annual programs, establishing scholarships, connecting not just with the community but also corporations and small businesses, to see how we can help on every single level."
"We want to celebrate the things we've done in the past and speak for the community about the issues we want to tackle in the future."
The NAACP's anniversary and Freedom Fund events are usually kept separate, but Dovinh said the events were combined to make Dyson's speech free and open to the public.
The Freedom Fund dinner at the Weston Hotel is the actual fundraiser. For ticket information call 206-595-5048.
Over the past two years, The Bush School's Diversity Speaker Series has welcomed more than a dozen nationally recognized speakers to engage in conversations about privilege and diversity. For more information about The Bush School's Diversity Speaker Series, go to www.bush.edu/diversity, or contact Dr. Eddie Moore, Jr., director of diversity, at eddie.moorejr@bush.edu or 206-326-7731.