President Elect Obama Will Be Greeted by a Stack of Problems

Zenitha Prince Special to the NNPA from the Afro-American Newspapers
Published: 12 November 2008 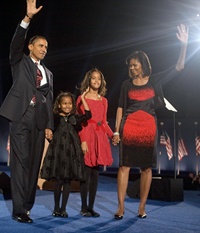 WASHINGTON (NNPA) - For president-elect Barack Obama, there will be no time for resting on his laurels now that he has defeated John McCain. Immediately after he is sworn in Jan. 21, Obama will begin one of the toughest four-year tests a president has ever faced in the nation's history.
"With the economic crisis and two wars being fought, this is not an easy time to be president," said Cordell Faulk of the University of Virginia's Center for Politics. "They're going to have to mold their administration to the times."
Allan Lichtman, a history professor at American University in Washington, D.C., said like great presidents of the past, however, Obama seems suited to the task of navigating the country through its current morass.
"He's very cool, very unruffled; he doesn't panic and he's retained his good humor, like Ronald Reagan, and that's going to be very critical," Lichtman explained. "Also, he's been very inspirational and that's an important quality because it helps bring people along with you and the only way to counter wealthy, special interests is the power of the people. That's how Teddy Roosevelt countered special interests in his administration."
Still, there are major drawbacks. As a relatively inexperienced executive, Obama will face acute pressure to produce results and to produce them quickly.
"He doesn't have four years to make all the changes that he wants," Faulk said. "He's got two years to ensure that the country is confident having a Democratic White House [and] a Democratic Congress. It's going to make him want to tack a little bit to the center."

Priorities 'Staked Out'
Already, the policy priorities have been staked out for Obama and his vice president, Joe Biden. And, given the recent near-trillion-dollar rescue plan for failing Wall Street firms that has ratcheted up the national debt to historic proportions, funds to fulfill campaign promises may prove elusive.
"Their plans are very ambitious [but] honestly, they're going to have to cut back on everything…on tax cuts," Faulk continued. "It's hard to see how we can continue with the bailout of Wall Street and with foreign adventures in the Middle East and cut taxes."
What Obama won't have to cut back on is Supreme Court appointments, getting one and possibly two during his first term. With affirmative holding on by a fragile 5-4 margin, Obama most likely will replace 88-year-old John Paul Stevens with another liberal.
The second oldest justice, Ruth Bader Ginsberg, 75, is also a liberal. Replacing either or both would maintain the present mix on the court. However, if McCain had won and replaced Stevens with a conservative, the right-wing would have obtained a clear five-vote majority.
Obama's approach to problem-solving—more "cerebral" compared to Bush's "from the gut" reaction, Faulk said—and his stance on taxes and other policies, analysts say, answers one demand that an overwhelming number of voters seem to share after the last eight years under President Bush – change.
"I think it's a return to a kind of liberalism that we have not seen since the 1960s, early 1970s," said Lichtman. "There's a much greater faith in government, a less militaristic approach to foreign policy and a much more multilateral approach compared to the Bush administration….there's less of an emphasis on supporting the wealthy."
But even though his policies reflect what Faulk calls a left-of-center point of view, Obama is trying to be pragmatic about it, seeking ways to inject revenue even as he spends, the University of Virginia political scientist said.
Tax Plan
That approach is evident in the Obama-Biden tax plan, which his Republican opponent, John McCain, condemned as a socialist attempt to redistribute wealth.
Roberton Williams, principal research associate with the non-partisan Tax Policy Center at the Urban Institute who analyzed the candidates' tax plans, said Obama's plan basically extends Bush's tax cuts to low- and middle-income citizens and adds others and pays for the lost revenue by increasing taxes on the wealthy, defined as those making more than $250,000 annually.
"Any time you are going to be fiscally balanced, you are going to end up with that type of income distribution," Williams said. "You certainly can't tax low-income people to help themselves."
Several of Obama's key tax policies are refundable credits such as the Making Work Pay Credit of up to $500 per worker; Universal Mortgage Credit, a 10 percent of mortgage interest for non-itemizers up to $800; a revised Child and Dependent Care Tax Credit equal to 50 percent of child care expenses that do not exceed $6,000; a saver's credit that provides a 50 percent match of the first $1,000 of contributions and the American Opportunity Tax Credit—formerly the Hope Credit—a 100 percent refund of the first $4,000 of college expenses.
While these plans could effectively address problems facing low- and moderate-income people, Williams said, it would boost debt by $3.5 trillion by 2018. McCain's would increase the nation's liability by $5 trillion.
"It's an expensive proposition," the researcher said. "It's very progressive, but it does create many fiscal problems."
And, it will do little to solve the current economic crisis if other ways of cutting spending or raising revenues aren't found, the report concluded.
Lichtman, the history professor, said Obama should look to the past for answers:
"Obama can take good lessons from Franklin Roosevelt, who came into office during a financial crisis, and that is bold, persistent determination and a willingness to try lots of different things. There is no one silver bullet for this economic problem."
So far, Lichtman has been impressed.
"He's shown tremendous willingness to experiment and change and try to do new things and not just walk down the line in Democratic orthodoxy," he said. By doing so, Obama, who has already demonstrated a conciliatory approach that welcomes ideas from all sides, may bump heads with his own party.
"The Democratic leadership in the House of Representatives may want him to move a little more to the left than he wants to," Faulk predicts. "But if Congress pushes the country too far left—and for the most part this is a center-right nation—Democrats will pay in 2012."

The Economy
To boost the economy, Obama has suggested: taxing oil companies' windfall profits to provide $1,000 tax reliefs to families; investing $60 billion over 10 years on transportation infrastructure, which is projected to create 2 million new jobs and stimulate about $35 billion per year in new economic activity; eliminating all capital gains taxes on start-up and small businesses; investing $150 billion over 10 years in renewable energy technology, which is expected to create 5 million new jobs; increasing the minimum wage and tying it to inflation; revising lending, foreclosure and bankruptcy laws to ensure people can keep their homes and more.
More importantly, Obama would likely invest in research about the causes of the current economic breakdown and seek long-term solutions, said Dianne Pinderhughes, professor of Africana studies and political studies at the University of Notre Dame. "He's good at consulting researchers, scientists and academia and really listening to their ideas."
It's a quality seen in his approach to urban renewal as part of his long-term approach to healing the economy.
"What is clear is that because Obama understands that metropolitan areas and urban areas are tremendous engines of the country, there is an urban agenda designed to address many of the issues that impact [these areas] because if you impact metropolitan areas you impact the country," said Obama supporter Mayor Michael Coleman of Columbus, Ohio, in a teleconference with the Black press.
It's an urban agenda that many look forward to.
"There are a number of good things in there," said Ronald Walters, a Black politics expert and professor at the University of Maryland. "He has already said he is setting up a White House Office on Urban Policy. If I were him, I'd get that staffed right away."
That office would oversee initiatives that include: a $10 billion yearly investment in early childhood education, scholarships to woo and train teachers committed to working in underserved areas, a fully funded program to add 50,000 more police officers on the streets, creation of a prison-to-work incentive program to reduce recidivism, reforming HUD and support programs to increase affordable housing, a fully funded Community Development Block Grant, investment in public-private business incubators and research and development, and more.
Walters said while most of the plans seem sound, he's troubled by the method.
"He's likely to take a broad, generic policy approach instead of a targeted approach. [But] if you look at Black and White communities, you have to look at the differential gaps and so this approach that one size fits all would not work," he said.
With any new president, there will be competition for President Obama's attention.
"He's going to have a number of things on his desk. So I am concerned that those issues that are important to poor Black and poor Brown populations will be shoved under the pile," Walters said.
A Black man sitting in the White House still will not be able to ignore the issue of race.
"Race is a sore spot," said Lichtman, the American University historian. "He'll have to tread softly but not back down, and he's shown his ability to do that. The best way to defuse the issue of race is for Obama to show he can be president of all people and to govern well, and governing well means solving problems."