By The Skanner News
Published: 12 November 2008 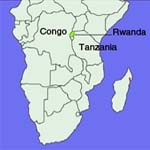 FRANKFURT, Germany (AP) _ Rwandan President Paul Kagame said Tuesday his country's sovereignty was violated when an aide visiting Germany was arrested in connection with an attack that set off Rwanda's 1994 genocide.
Rose Kabuye, Kagame's chief of protocol, was arrested Sunday at Frankfurt International Airport on a warrant from France, where she is wanted in connection with the fatal April 1994 attack on the plane of President Juvenal Habyarimana.
Hutu extremists accuse Tutsi fighters _ then led by Kagame _ of shooting down the plane and killing Habyarimana, a Hutu. Other speculation, though, has focused on hard-line Hutus hoping to create a pretext for mass violence against Tutsis.
Kagame visited Kabuye on Tuesday at the Preungsheim women's prison where she is being held. He told reporters afterward that her case was politically motivated and added it could have an effect on Rwanda's cooperation with the European Union in regard to the fighting in Congo.
"Certainly the arrest of Rose has some implications, foreseen or unforeseen, because in many ways it's a violation of the sovereignty of Rwanda,'' he said. ``We will see how we can challenge such actions, which in my view are simply a question of being arrogant and people being a law unto themselves.''
What remained unclear is whether Kabuye had diplomatic immunity. Kagame did not explicitly say that she did, though he said she was in Frankfurt on government business.
Hildegard Becker-Toussaint, a German prosecutor, said there was no reason to believe Kabuye could claim immunity, hence her arrest.
"We had no reason to believe that she had diplomatic immunity because she explicitly traveled privately. She wasn't on the president's plane,'' she told AP Television News, adding that she had flown to Frankfurt from Addis Ababa, Ethiopia, aboard a Lufthansa flight.
"When there's an arrest warrant out in France, we have no reason to doubt it,'' she said.
Kagame said there was no legal ground to arrest Kabuye because she was traveling to Germany on government business before his own visit to meet with German business leaders at a private conference.
"For Rose, it was official,'' he said of his chief of protocol. ``She had been assigned by the government to travel with president. Rose's visit to Germany was not private.''
Kabuye's arrest drew the ire of the African Union, which said that that this "development could endanger international law, order and security.
The commission also asked all U.N. member states to impose a moratorium on executing arrest warrants ``until all the legal and political issues have been exhaustively discussed between the African Union, the European Union and the United Nations.''
Forster, Kabuye's lawyer, said that Kabuye has agreed to be extradited to France, where she was expected to arrive in a few days to be questioned.
French authorities, who are investigating because Habyarimana's two pilots were French, suspect Kabuye housed the commando unit blamed for shooting down the plane. Kabuye's lawyer, Lef Forster, said his client denies involvement.
Ties between Rwanda and France have been strained since a French judge's decision to issue warrants for nine associates of Kagame, including Kabuye, over the crash, All nine are in Kagame's government.
The Tutsi-led government and genocide survivor organizations by contrast have often accused France of training and arming the Hutu militias and former government troops who led the genocide.
Rwanda's genocide began hours after Habyarimana's plane was mysteriously shot down on approach to the capital, Kigali, on April 6, 1994.
The 100-day slaughter, in which more than 500,000 minority Tutsis and moderate members of the Hutu majority were killed by Hutu extremists, ended after Kagame's forces ousted the Hutu government that orchestrated the killings.