Poets, performers, teachers, writers – Walidah Imarisha and Turiya Autrey are all that.
Now they're becoming promoters.
Starting this week, they host a new series of conscious hip hop shows featuring the X-Vandals at shows, film screenings and lectures stretched between Portland and Eugene.
"The problem is that when money enters into it then starts to squeeze down and narrow out everything, and what's not commercially viable gets left to the side," Autrey says. "What we're trying to do with these bookings is push those rules back a little bit and make more space."
The promoters are especially proud of bringing the X-Vandals duo of Not4Prophet and DJ Johnny Juice – who was a member of Public Enemy when he was only 15 years old – as well as Vagabond of Ricanstruction Netwerk from New York City.
"They've collaborated to do this really amazing – it's hip hop, it's old school, it's loud," Imarisha says. "Both DJ Johnny Juice and Not4Prophet have been involved in organizing work around issues of race, incarceration, liberation struggle, so they're fully understanding the connection of hip hop and really kind of resurrecting hip hop as a tool for change."
Imarisha and Autrey are co-instructors in feminist studies at Portland State University. They perform together as Good Sista/Bad Sista, hosting poetry events and slams as well as headlining events for social change organizations, as they did at a recent evening show for Communities Against Rape and Abuse in Seattle.


"I feel like as an artist obviously it's important to get my voice out there, but I think another important role for an artist is to create space for other people to explore their artistic self and support their work," Autrey says
"I think the power of Portland is that there are people here hungry for it, ready for it, interested in hearing different voices and different analysis and different experiences," Imarisha says. "Portland's really ripe."
Imarisha grew up on military bases overseas, went to high school in Oregon and then earned her college degree at Portland State University, where she met Autrey.
Autrey grew up in Seattle and California and has lived in Portland almost 14 years. Much of her work is in the field of education. She's taught at Portland State University five years as an adjunct professor, and before that she taught for three years as an undergraduate and graduate student. She was named most outstanding teacher in 2007.
"I do creative writing workshops, hip hop workshops with youth and performance workshops with the community of young writers, writers in the schools, Caldera," she said. "I've been organizing shows in Portland for close to 10 years."
"How we hooked up and started doing things as Good Sista/Bad Sista, we just started performing together and then we were both doing separate organizing stuff, and so we drew each other into that work," Imarisha said. "We also drew each other into the teaching work that we do, we also teach in an elementary school, at Rosa Parks, for Community of Writers."
Imarisha relocated to Philadelphia for eight years where she worked in prisoner/family organizing, and anti-war organizing.
"I was responsible for helping to start AWOL Magazine, which was a national hip hop publication," she said. She was involved with Ricanstruction – a Puerto Rican-New York political band collective, then moved back to Portland a year ago and reunited with Autrey as Good Sista/Bad Sista. 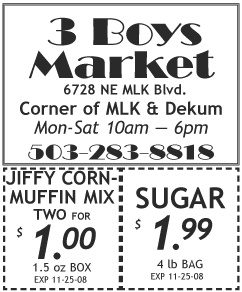 "I think one of the things we try to do with Good Sista/Bad Sista is link together with different forms of oppression and recognize that, especially as women of color, that assault is not separate from the prison industrial complex, it's not separate from the war going on in Iraq, it's not separate from domestic violence," Imarisha says. "These all impact us on our flesh as women of color and we have to find ways to draw those connections that are natural for us and not natural in the way we talk about it in the larger political context."
Currently the two women are teaching a Black feminism class at Portland State. This winter they're planning a race, gender and science fiction literature course.
"So much of hip hop is taking the things that you have and making do, and then making something phenomenal with them," she said. "There are so many aspects of it that I think people don't remember that it was rooted in youth finding constructive, artistic ways to really speak their mind, come into information, share that information."
Autrey quotes Chuck D, who once said that hip hop is the Black CNN.
"So much of that is true, in the way that people across the nation really got a feel for what was going on through the music and the art," she said. "It's like a continuation of a long history of how people have used artistic expression as a way to change the world around them, create activism and engage in revolutionary acts."