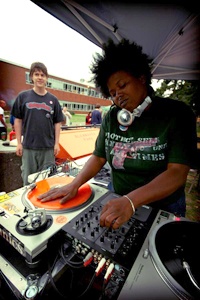 Unveiling its first round of significant evening program changes, KBOO Community Radio, 90.7 fm, has cut its soul music programming, but added a nightly hip hop talk show and a Friday night slot for guest artists produced by Deena Barnwell of The Soundbox.
The new schedule starts Monday, Nov. 3, from 6 p.m. to midnight, and comes after a yearlong process of public comment that involved a complete reconstitution of the station's programmers.
The daytime broadcast schedule changes are expected to be announced by the end of the year.
Hard Knock Radio is a syndicated African American news and hip hop hour, produced by Davey D, at KPFA in Berkeley. It will be on every weekday evening from 7 to 8 pm to extend public affairs and lead in to music shows. The program is a mixture of news, interviews, political commentary and hip hop music.
His recent interviews include Green presidential candidate and former U.S. Representative from Georgia Cynthia McKinney, and an archived chat with the late Rudy Ray Moore. Commentaries include, "The Top 10 Racist Rush Limbaugh Quotes," and "The N-Word Flourishes Among Latinos Within Hip-Hop – Should We Care?"
Barnwell's new Friday night project, The Turntablist, will serve as a revolving door for local talent. The program slot immediately after that show remains open for more proposals from current KBOO volunteers, in the area of urban music or electronica.
"One of the ideas for new programming – there's lots of DJs and MCs and turntablist musicians that are too busy to do a regular show, and we decided to open up air time on Friday nights and book people in each week," said KBOO Program Director Chris Merrick.
" 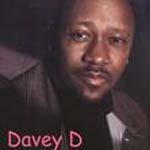 We felt that Davey Ds 'Hard Knock Radio,' and having more urban music and mixes and things would reinvigorate listenership and we are really hoping for an increase in African American participation," he said.
"As a followup to that, because of Davey D, a couple of African American programmers at KBOO have discussed creating their own collective to do the same thing," he said. "So it's possible we can have more local news and public affairs in the future by an African American collective, which is also one of the goals."
Monday night focuses on poetry, spoken word, experimental music and radio theater.
Tuesdays include a new world music and electronica program, "The Melting Pot," with Joe Azavedo.
Followed at 10 p.m. by Afro-Caribbean shows in rotation with Charlie Rooney and Pablo Innis.
Wednesdays will feature alternative music with Brandon Lieberman's "Drinking from Puddles" followed by the punk music mainstay "Life During Wartime."
Jamilah Bourdon's music and public affairs show "Guess Who's Coming to Radio?" moves to Thursday nights starting at 8 p.m., followed by King Fader's "Mix-Up" every other week.
The station's management has grappled with a shrinking membership base and, in 2007, launched a major public input process that involved three community meetings and circulation of both online surveys and paper questionnaires circulated at events around the region.
"I'd like to thank all the people who completed surveys," Merrick said. "Another area that people don't think about is the prison population — we got a lot of feedback from prisoners, too, about how we can serve some of their needs, White or Black or Hispanic."
For more information on the KBOO Radio program schedule, go to www.kboo.fm.