Smith May Lose Grandchildren to Adoption 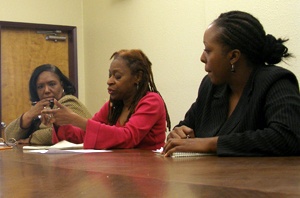 The Urban League's Midge Purcell, center, speaks to a group that has taken up Smith's cause. She is flanked by Sunshine Dixon, right, and D'Norgia Price.

Short of a legal miracle, Carolynn Smith may be permanently legally separated from her two youngest grandchildren on Oct. 30.
Smith has been fighting the Department of Human Services Child Services for over four years for custody of Kofi, 7, and C'Lynn, 4. The two children were removed from their mother's custody after Kofi was found to have cocaine in his system and were fast-tracked for adoption this year. Smith's daughter has a history of drug addiction.
A group of community supporters – including activist and psychotherapist Ed Garren, members of the Urban League of Portland, Oregon Action, community activist Jeri Williams and many others – met Monday at Calvary Christian Center to discuss the status of Smith's case. More than 70 people attended.
"It made me feel good," Smith said. "A burden just lifted off me."
A volunteer attorney is looking into all the last minute legal maneuverings available, but Garren said it is very likely that all legal options have now been exhausted or have come too late. Smith, who has custody of her five other grandchildren, will have to rely on the generosity of the adoptive parents if Kofi and C'Lynn will ever have a relationship with their brothers, sisters and other blood relatives.
A court-hearing before Judge Nan Waller at 4 p.m. on Thursday at Multnomah Central Court, 1021 SW 4th Ave., room 406 could make the adoption final and permanent. Smith
Sunshine Dixon, of the Urban League, said they are looking at ways to prevent something like this from happening in the future. She said supporters will come up with solutions regarding DHS policy, cultural competency and proper review. Smith says she's ready to challenge the policies that originally separated her grandchildren.
Garren — a child services social worker for two years in California — says the system is chronically under-funded and needs reform. As a professional psychotherapist, Garren says an adoptive family structure can produce mixed results for some children. Unless the adopted child sees the parents as just and nurturing upon entering adolescence, there's a chance the child will fail to connect with the family longterm. He sees this especially when children are of different races, ethnicities, religions or sexual orientations.
"People born to biological families, you can have disagreements, but whether you like it or not, they're connected," he said. Although there are many success cases, adoptive families fail to have the "blood" connection. One recent action by the adoptive parents worries Garren.
When Smith was told an article written by this reporter on Aug. 16 had "offended" the adoptive parents, all visitation between the siblings and grandmother were cancelled by the adoptive family. Garren says the adoptive parents need to create an open relationship between C'Lynn, Kofi and the rest of their biological family, with whom the children had a relationship. By cutting off contact with previously established relationships, the adoptive parents risk creating an ongoing problem. Smith says neither she nor the five siblings have been granted a visitation in months.
"I can understand if they're mad at me," she said. "But why take it out on their brothers and sisters?"
The Department of Human Services' own policies dictate that blood relations should be given first vetting in the adoption process. It is nearly impossible to know in what seriousness Smith was considered, as the case file is closed to public scrutiny. Representatives of DHS have repeatedly refused to discuss the specifics of Smith's case due to privacy laws.
Smith is planning a rally at 3 p.m. on Thursday, Oct. 30 in front of City Hall to gather supporters, at which time she will march to the courthouse for the 4 p.m. hearing.