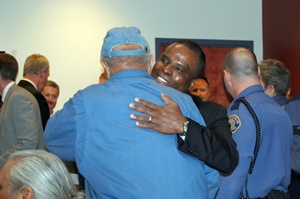 Foxworth accepts a hearty embrace from Charles Ford, one of hundreds of well-wishers at the retirement ceremony.

Commander Derrick Foxworth this week announced his retirement after 27 years at the Portland Police Bureau.
A party commemorating his service was Wednesday, Oct. 29 at Northeast Precinct. It was open to the public.
Foxworth spoke with The Skanner about his career and his hopes for the bureau in the future.
He says he chose to retire because he's ready for new horizons.
"I'm at that point in my career where I'm eligible and I believe that it's a good time for me to go and to explore other opportunities," he said. "My plan honestly is to take some time off and to just relax and then during that time to kind of reflect on what it is I want to do with the remaining productive years of my life."
Foxworth, named chief of police in 2003 by former Mayor Vera Katz, after former Chief Mark Kroeker was abruptly fired.
However Foxworth himself suffered a career-shattering blow in 2006 when a 46-year-old desk clerk accused him of sexually harassing her four years earlier, filing a lawsuit against the city.
The controversy took a number of turns, but in the end resulted in Foxworth's reassignment from police chief to commander. He currently serves as commander of Southeast Precinct.
While his career may have had its down sides, he's also saved lives.
What does he think of as a high point?
"There's been a lot," he said. "There is one that really sticks out, and it wasn't one of those heroic things, but it was an interaction I had with a young man who was 11 years old."
Foxworth has a picture in his office of the child standing next to him and former Mayor Vera Katz, in front of Northeast Precinct.
The caption says, "When I grow up I'm going to be a policeman just like my friend, Lieutenant Foxworth."
"It's a cute little picture with him smiling and it's like, you know what? This is what this job's all about," Foxworth says. "If people don't see people who look like them in certain positions, they may never aspire to do those things.
"I feel good that I'm a police officer and he looked up to me as a role model and he aspires to do the same job that I've dedicated myself to doing."
Hired in 1981, Foxworth has served in almost every capacity at the police bureau, from street cop, to Public Information Officer and chief.
Asked what he sees as the most difficult point in his career, Foxworth answers without hesitation, "Jan.16, 1992."
It was the Nathan Thomas shooting, which occurred when Foxworth was the bureau's spokesman.
The incident unfolded when police officers responded to a burglary call from a house in the Laurelhurst neighborhood in the middle of the night. They tracked a disturbed young man named Brian French to a neighbor's home, where, drunk and armed with a knife, he had broken in and taken hostage a 12-year-old boy.
Officers observed French holding the knife to Thomas' throat in an upstairs hallway. The officers fired shots at the suspect, striking and killing both.
"I was the PIO at that time and I remember going to the scene and seeing the family that was devastated and the officers who were impacted by that," Foxworth said.
"That was tough for me because it was such a tragic incident, and then number two, I recall that my own son at that time was Nathan's age, and Nathan played soccer and I recalled that my son played soccer as well, and my son had just recently played one of his club teams, within a short period of time before the incident occurred," he said. "It was just something that in some sense very personal to me, but that was probably the toughest time."
Foxworth says he believes Dan Saltzman, named this week as police commissioner, will do a good job if he takes the time to listen to the people he'll be managing. He said he hopes the department will keep pursuing a community policing model, and work harder to achieve racial diversity within the ranks.
Asked for one last comment, Foxworth quoted presidential candidate Barack Obama.
"It's like something that Barack said, and I always felt the same way too —- it was never about us or me, it's always been about what can I do to help someone else, what can I do to make the community better," he said.
"I would just like to know that, because Derrick Foxworth was at the Portland Police Bureau, that he did make a difference, that things in the community where he grew up and that gave him so much — he was able to give back to that community and make it better."