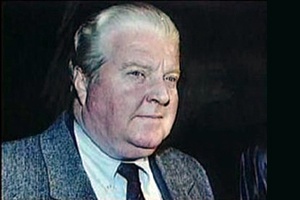 CHICAGO (AP) — A former Chicago police official accused but never charged with beating, shocking and otherwise torturing scores of black suspects in the 1970s and 1980s was arrested Tuesday on federal charges of lying about participating in the abuse.
A federal indictment charges that Jon Burge, 60, lied in written answers to a civil rights lawsuit when he said he and other detectives hadn't participated in such activities as the "bagging" of a suspect — covering his head with a typewriter cover until he couldn't breathe.
Burge, fired by the police department in 1993, has long been the focus of allegations by civil rights attorneys that he and his detectives used beatings, electric shocks and death threats against homicide suspects to obtain confessions.
A report by two special prosecutors appointed by the Cook County Circuit Court concluded two years ago that Chicago police tortured black suspects. But they said the actions were too old to warrant indictments.
"There is no place for torture and abuse in a police station," U.S. Attorney Patrick J. Fitzgerald said in a statement issued after the arrest. "There is no place for perjury and false statements in federal lawsuits. No person is above the law and no person — even a suspected murderer — is beneath its protection."
Burge was arrested before dawn at his home in Apollo Beach, Fla., after federal prosecutors in Chicago obtained a sealed indictment charging him with perjury and obstruction of justice for the statements he made in 2003 in response to the civil rights lawsuit.
Burge attorney James Sotos declined comment when reached by The Associated Press.
According to the indictment, Burge was asked whether he knew anything about or had been involved in the torture of homicide suspect Madison Hobley and others and said: "I have not observed nor do I have knowledge of any other examples of physical abuse and/or torture on the part of Chicago police officers at Area 2."
He repeatedly answered similar questions with flat denials.
The indictment against Burge, however, does not say Hobley was tortured, but that Burge lied with respect to participating in or knowing of any torture under his watch.
Hobley claims he was tortured in an effort to extract a confession to murder and arson in a January 1987 apartment house fire that killed his wife, infant son and five others. Hobley says he never did confess and that a confession introduced at his trial was fabricated by homicide detectives.
Hobley was one of four Death Row inmates pardoned by Gov. George Ryan in January 2003 on the grounds that there was insufficient evidence they were guilty.
All had been convicted on evidence gathered by Burge and detectives under him and the city of Chicago earlier this year approved a $20 million settlement of lawsuits brought by the men.
The mother of one of the other men, Aaron Patterson, said she was pleased that she may see some measure of justice.
"He can feel what it's like to be arrested and handcuffed and put in jail and have a mug shot taken," said Jo Ann Patterson, whose son is now serving a 30-year sentence after being convicted on weapons and drug charges. "He was laughing but I don't think he's laughing any more."
As he pardoned Hobley, Patterson and two others, Ryan commuted the sentence of every inmate on Death Row, citing a number of other cases of wrongful murder convictions. Ryan said there was too much uncertainty about the convictions and declared a moratorium on the death penalty that remains in place.
An attorney who represents two men allegedly tortured by Burge's detectives called the arrest of "enormous symbolic importance" in Chicago, where the police department has long been dogged by allegations of misconduct.
"This has been a symbol of a pattern of racism and of police as an occupier in certain neighborhoods, and the federal government stepping in here just has enormous importance even if it only this one case," said Locke Bowman, of the MacArthur Justice Center at the Northwestern University School of Law.
The two obstruction counts against Burge each carry a maximum penalty of 20 years in prison. The perjury count carries up to five years. Each count also provides for a $250,000 fine.