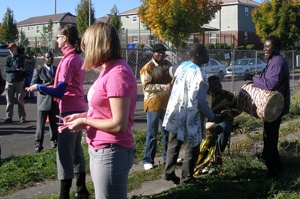 Planned Parenthood broke ground at the site of their new facility on Oct. 22. Volunteers handed out ribbons of support as Okaidja and his band performed (above). The regional headquarters will be located at the corner of Beech Street and Martin Luther King Boulevard, several blocks from their current medical offices 3531 N.E. 15th Ave.
The groundbreaking occurred with a background of protestors from Precious Children of Portland, who have held fairly regular protests at the site since the family planning organization announced it would be constructing the facility in 2007. The original builders, Walsh Construction, dropped out of the project after reading about the harassment and threats other builders have received across the country. B & G Builders have now taken the role.
The executive director of Planned Parenthood of the Columbia/Willamette David Greenberg said the organization's services are especially needed in economic hard times. He said their 15th Avenue clinic serves 10,000 men, women and teens seven days a week. They are at capacity to provide counseling, STD screenings, gynecological exams, pregnancy tests, birth control services and abortion services, among others. They serve many low-income individuals throughout Portland.
The three story, 42,000 square foot building will contain a medical center, a day care center, administrative offices, community rooms and other retail space.