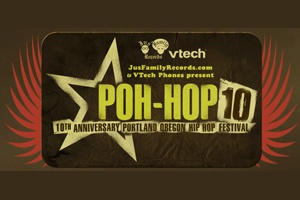 Portland's hip hop scene has often been the source of controversy for the city's Powers That Be. Whether it was through the Oregon Liquor Control Commission, the police or City Hall, those persons who saw rap as a danger always made their voices heard.
And P-Town's hip hop emissaries also made their voices heard. Despite the criticism, harassment and calls to end all hip hop shows by Portland Police, the Portland Oregon Hip Hop Festival has battled on.
Despite a four-year absence, this year's 10th POH HOP is the biggest the city has seen since the festival erupted onto the scene in 1995 at the now closed La Luna club. With just an idea, Terrance Scott (aka Cool Nutz), David Parks and Steven Spyrit started the event to bring together local artists. In those days, Scott says, hip hop wasn't so divided.
"There was just good hip hop and bad hip hop," he told The Skanner.
Now, Scott – the only founding father of POH HOP who's still involved — says he's booking everything from gangsta rap to spiritual hip hop.
"We've come a long way," Cool Nutz says. "But POH HOP has always centered on local artists."
And this year is no different. With nearly 50 acts over four nights (See SIDEBAR for details), POH HOP 10 is a world away from their relatively humble beginnings. David Parks is pursuing his own artistic work in New York City. Steven Spyrit is a spoken word artist. The local hip hop scene has progressed in to a wide variety of talents poised to take on national fame. And Scott won't be taking the stage as Cool Nutz.
This year, it's all about the larger community, he says.
As anyone can tell you, Scott is one of the most prolific voices in Portland hip hop. Without him, local hip hop wouldn't have such a strong promotions agent and it certainly wouldn't have POH HOP.
"People have been lazy," says DJ OG One about why no one else stepped up in POH HOP's absence. "We're talking about the same guy who was out on his bicycle at three o'clock in the morning putting up posters for his shows."
But Scott says he doesn't want to make it just another Cool Nutz promotions event. He wants to see the event as a platform to show fans what a concentration of talent exists in Portland and in the Pacific Northwest. And while the scene has been on the verge of breaking out for years, the concentration of talent is swelling. Scott says he left out a lot of great artists this year. He had to. There simply wasn't enough time for everyone he wanted to perform. With each artist getting on average a 15 to 20 minute set, each night of POH HOP is packed with back-to-back performances, not to mention time for the hosts and DJs. 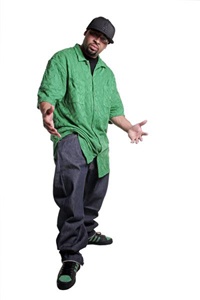 The lineup – which includes Illmaculate, Large Professor, Rev. Shines, Maniac Lok, Mistah Fab and many, many others – nearly rivals Portland's other music festival: MusicFest NW. That festival has grown to include hundreds of artists, overlapping shows at multiple venues and national acts. Scott was once the hip hop coordinator for MusicFest, and would like to see POH HOP grow to that level.
Mic Crenshaw, a founding member of Hungry Mob along with David Parks - who says he helped Parks come up with the festival's name - thinks it's entirely likely. Speaking to The Skanner while on tour in New York, Crenshaw says the talent in Portland rivals anything he hears in other big cities, including the Big Apple.
"Portland seems like a black hole … a very hard place to achieve sustainability," he says. "It's a nice incubator to develop independent skills, but now its time for me to be gone from Portland as much as I can."
"Sometimes people don't take themselves seriously enough," he says. On a side note, Crenshaw will be performing with Hungry Mob during his tour on the East Coast.
And sometimes, says OG One, when they don't take themselves seriously, neither do fans. OG says Scott is renowned for his relationship building and younger artists should pay attention. It's part of what has kept POH HOP alive throughout the years.
Back in '95, OG says many artists didn't do enough to promote themselves. In today's music business climate, if you don't do the work, don't expect some record executive to find you.
"(POH HOP) is still a platform where up and coming artists can be showcased," OG says.
Another big change since 1995 is the way mainstream society treats hip hop.
Deena Barnwell, local music producer and host of "The Soundbox" on KBOO community radio, says POH HOP is a critical cultural institution which was forced to change over the years.
"POH HOP has dealt with no support, even oppression from Portland for its concept and vision - now that Hip Hop is a little more commercialized, it's not such a big problem," she says. 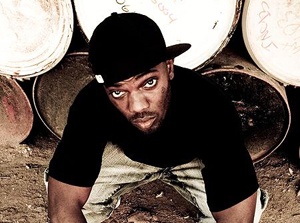 "It has taken someone with the ability to deal with the Portland police and the fear of hip hop music's settings. Basically I think it's just taken somebody with the tenacity to hang out and make it happen every year, even though even the police department, the mayor … the city was not giving him any support and he still did it."
But things have changed from the early days of the festival when the "powers that be" tried to scare the venue managers into cancelling the festival, said Scott.
"The environment has changed. For me, the way I handle my business is different," He says.
So has the attitude of people, as hip hop moves more and more into the mainstream. In a Willamette Week article dated Sept. 10, 1997, police tried to force La Luna to stop holding hip hop shows, despite the fact that most of the bad behavior Det. Bill Calder cited did not happen during rap concerts. In the same article, another complainant, apartment manager Dave Marbaugh, said he didn't have any objections to a different club until "they started playing that rap."
By the time this paper hits the streets, the first night of POH HOP will be over. And it will be up to the hip hop lovers of Portland whether or not the rest of the festival will sink or swim.
"This year it's needed. We need to make a statement," Scott says. "It's up to us to take it into our own hands to push the music out there and make it visible."